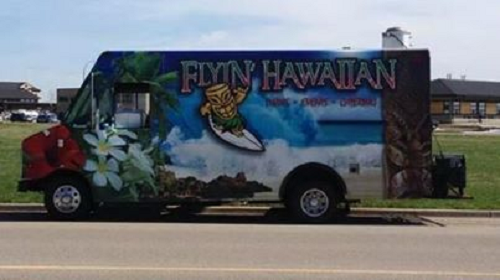 LETHBRIDGE – Say Aloha to the first food truck in Lethbridge… and it won’t be the last. Ben Vaka is from Hawaii, and he wanted to bring the spirit of Polynesian food to southern Alberta.

“All of our friends say you have to make this and sell this. I said no one is going to buy any of these. I went to heritage days and we were sold out in 2 hours and we looked at each other and we said see!!”

The Hawaiian favourites have been a hit. In just 5 months thousands of people are following the Flying Hawaiian on social media.

The food truck movement is new to Lethbridge, but the city says southern Albertans are intrigued.

The city says there are a handful of food trucks on Lethbridge streets right now, and they have received dozens of phone calls from those wanting to be part of the global food truck trend.

“Last summer I had many inquires and lots of questions about food trucks,” says Beverly–Ann Parker with the City of Lethbridge.

City officials say while it’s an easy process to get a license for a food truck there are some strict guidelines.

“They can’t be within a 100 meters of any permanent business selling similar guidelines.”