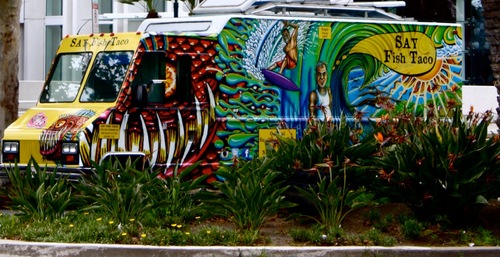 Los Angeles has plenty of food trucks, but Say Fish Taco Truck is apparently the first one to come directly from Mexico to the City of Angels. Originally named Sayulita Fish Taco and founded in 2001 in Puerto Vallarta, SoCal native Mark Alberto has returned home.Roaming around Mid-City and the Eastside since mid-April, Say Fish boasts handmade tortillas, still a rarity in LA, wrapped around shrimp and fish tacos. The vehicle also serves burritos, quesadillas, and bowls priced between $6 to $11. Find the truck’s location via Facebook at the moment, though Twitter and Instagram are also on the way. [ELA]