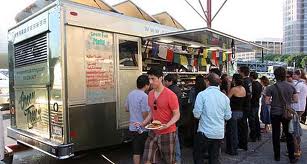 The Malibu City Council is expected to discuss possible further regulations on mobile vendors — like food trucks — and billboard displays that dot Pacific Coast Highway in response to complaints from residents.

With complaints about food trucks and other mobile vendors on the rise in Malibu, the Malibu City Council is set to discuss the city’s options in putting more restrictions on the businesses later this month.

Councilwoman Laura Zahn Rosenthal said she is in favor of enforcing laws already in place that regulate food trucks and other mobile vendors.

“I am hoping that we have the right to eliminate mobile vendors from the State Highway per Section 731 of the State Highway code. As you can see, this would be the best case scenario regarding this issue,” Rosenthal said. “For once, having a state highway as our main street would be an asset.”

The meeting is set for 6:30 p.m. Nov. 13 at Malibu City Hall (see the attached agenda report to the right).

Most concerns aired by residents over the past several months before the council stem from food trucks along Pacific Coast Highway, especially on the corner of Heathercliff Road. Other complaints have been made about a juice truck in the Cross Creek area and vehicles that rent recreational equipment near the Malibu Pier.

According to a city staff report prepared by Associate Planner Joseph Smith, the city is working to step up enforcement through the Los Angeles County Sheriff’s Department of existing provisions in the State Streets and Highway Code, which limits parking on public rights-of-way to 72 hours.

The council could also consider extending those regulations to other public rights-of-way other than along PCH, but that would require an ordinance, the staff report states.

Restrictions by other cities, including in Manhattan Beach, have generated lawsuits, something Malibu hopes to avoid.

“Regulating these uses is challenging for a variety of complicated legal and policy reasons, and, in general, municipalities have been limited in the extent to which they can regulate,” according to the report.

Matt Geller, chief executive officer of the SoCal Mobile Food Vendors Association (SCMFVA), said his organization has worked with cities in the past to “ensure mobile vendors are able to do business the way the state intended.”

Geller said the SCMFVA is willing to help advise the city on what other coastal cities have successfully done to regulate mobile vendors.

“Malibu’s a very cool, kind of hip place. This kind of trend has taken cities by storm. They have a lot of people who really like it. It’s balancing new trends with regulations that are sound and don’t go above and beyond their municipal power. We love trying to get cities in a place where they are comfortable with mobile vending,” Geller said.

Earlier this month, the city spent $38,000 to install 39 trash cans near bus stops along Pacific Coast Highway as part of an effort to reduce the amount of trash near food trucks.

Rosenthal said regulating the billboards may be more difficult.

“I am certainly in favor of finding ways to curtail these visual blights and distractions,” Rosenthal said