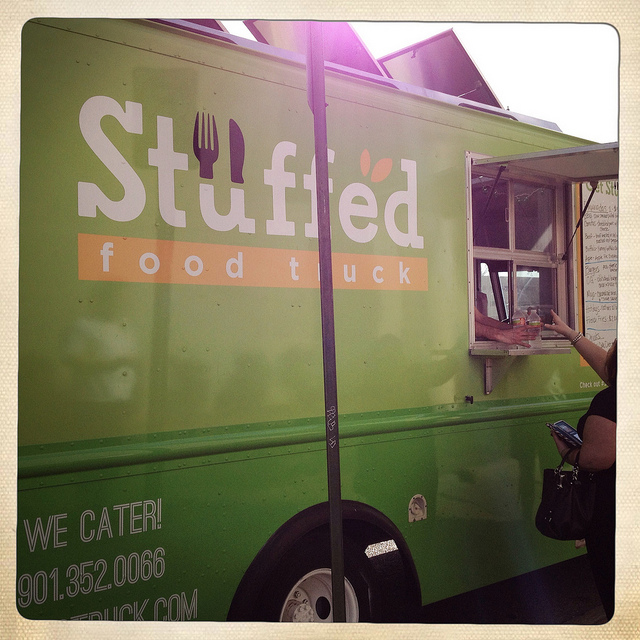 By Kerry | I Love Memphis Blog

While walking around downtown on Saturday, I spotted one of the smartest food trucks in Memphis. The Stuffed food truck is relatively new, but they’ve already figured out that parking at Beale and Second during the St. Patrick’s Day parade is a solid move.

Stuffed Food Truck is doing it right. Their menu is limited to burgers, empanadas, a few sides and a dessert empanada. It’s not a bad thing – by narrowing their options and not trying to replicate a full-scale restaurant on wheels, they’re able to serve the food quickly.

Another example of how they’re getting it right: I’ve seen them parked in the same spot at Beale and Second at 11 p.m. on a Saturday.

I wasn’t crazy hungry, so I ordered a pair of empanadas ($8 for two), and proceeded to eat one of them before I could take a picture.

The empanadas come filled with your choice of beef, buffalo chicken, shredded pork, barbecue or apple pie, and you can order two different kinds if you order them as a pair.

I tried the barbecue, which came stuffed with shredded, sauce-drenched pork shoulder and slaw. The meat was awesome, and the shell was just crunchy enough, but the slaw seemed kind of generic. It was easy to eat while walking (a major bonus for food truck food). I’ll definitely be back to try their burgers.

Stuffed Food Truck posts its daily locations to Twitter @getstuffedtruck, to Facebook, and toFourSquare. They accept cash and credit cards (thanks for the edit, guys!).