Even from the back of the line, the BBQ parfait photo on the side of Pop’s Smokehouse grabbed my attention. As I worked my way closer to the food truck window, I was delighted to read this description: a 16-ounce meal in a cup for $6.

Although the fitted round lid teased ice cream, the cup’s ingredients were savory not sweet. Baked beans filled the bottom quarter of the cup, and cheese sauce came next, followed by pulled pork, barbecue sauce and more cheese sauce. A healthy scoop of cole slaw or potato salad crowned the glorious concoction.

Jeff Toney, who owns and operates Pop’s Smokehouse with his wife, Kim Toney, invented the parfait so customers at fairs and festivals didn’t have to juggle cumbersome Styrofoam boxes.

“It just made sense,” Toney explained. “Who says you always have to eat barbecue a certain way?”

No matter what your preference, Pop’s Smokehouse barbecue is outstanding, and Toney has the competitive credentials to explain why. Here’s one example. The Memphis Barbecue Network gave Toney’s team Boars Night Out a triple win in 2012 for best home team, rib team and shoulder team. 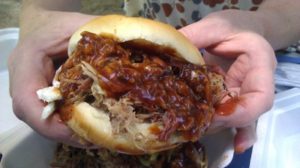 For his truck, Toney follows traditional barbecue tenants, cooking over cherry wood so meat holds on to a nice pink tinge. The menu is simple but comprehensive, offering family friendly choices like Nathan’s jumbo hotdogs ($3), smoked chicken nachos ($8), loaded baked potatoes ($6) and cheeseburgers ($4), along with mammoth barbecue and slaw sandwiches ($6) that need two hands to eat.

Although the Toney’s truck is based in Southaven, Mississippi, the couple works most often in Memphis. Look for them on President’s Island, at the Shelby Farms Sunday afternoon food truck rodeo, and at local medical centers. Go to Pops Smokehouse website for a weekly update on the truck’s specific locations. 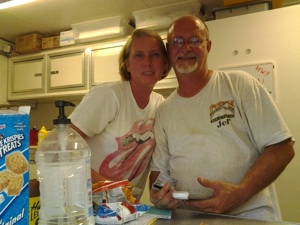 I met the Toney’s at the Dixon’s Food Truck Fridays, where they took time to explain their work with Operation BBQ Relief, a national disaster relief organization started after the Joplin, Missouri, tornado in 2011. Since then, members from across the county have brought mobile feeding stations to communities crippled by natural disasters, including Moore, Oklahoma, after the EF5 tornado in May.

“We were on the road within 12 hours after the tornado, and we served 144,000 meals over eight days.” Toney said. “I’ve never seen anything like it in life.” 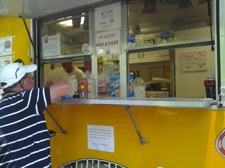 A member of the Memphis Food Truckers Association, Toney also is working with local officials to start a similar relief organization for the Memphis area. “With 15 trucks, we could get food out at a moment’s notice,” he said.

Toney sees a local disaster relief organization as a way for food truck operators to give back to their own community. “The city has done a lot for us,” he said. “We think this would be a great service that we could offer in return.”