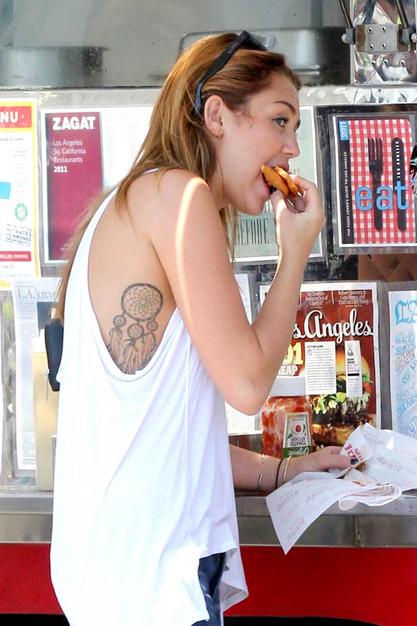 While on a casual walk on the streets of The City of Angels, former Disney star Miley Cyrus gives a clear example of what a bad diet means. She was photographed eating junk food from a food truck in Los Angeles. And one day before, she tweeted her dinner menu, which included ol’ McDonalds, omg! reports.

Who says celebrities eat only vegetables, fish and drink only plain water? Even though many of them look incredibly gorgeous on the red carpet, they are humans and so, imperfect. They may forget for several months that the gym is invented, or eat greasy sugar bombs. Here is one example that the starts are not always glam as we might be tempted to think.

On Wednesday, the former Hanna Montana star, Miley Cyrus, 18, was with her mom  when they spotted a food truck on the streets of Culver City, California. They both had a casual look, wearing jeans and t-shirts. Miley has just returned home from her Gypsy Heart Tour, which ended earlier this month in Perth Australia. Maybe the “Can’t Be Tamed” singer missed home too much because she bought one of the most popular foods you can buy in the street: a traditional hotdog. Either she has been craving for a hotdog with mustard and ketchup for a long time, or she was incredibly hungry. She ate it pretty fast!

Miley may be a fan of traditional American food. The trouble is that she is mostly oriented towards junk food. For example on Tuesday, just one day before, she wrote a message on her Twitter page saying “Wow. I am WAY to full. Chinese for dinner and McDonalds for dessert. #thegoodlife.” One thing is for sure. She is not worried about her figure and not trying to lose weight. On the other hand, no matter what the weight plans are, you shouldn’t make a habit out of ingesting junk food every day. You will be sorry later.