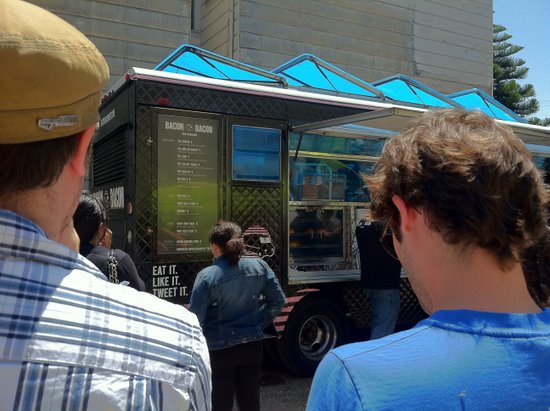 Nearly 700 of the 2000 attendees at the event were polled, and asked to vote for their favorite food truck of the day, after a sampling from upwards of 23 food trucks at Northern California’s largest and most diverse mobile foods festival. Sixteen of the 23 vendors received votes, while seven received no votes.

Ballots were included in an entry form for a drawing to win a Nintendo Wii Console bundle package with several games, sponsored by Stitches ‘n Dishes. The entries were tabulated immediately following the conclusion of the event, and double-counted.

The Bacon Bacon truck owned by Jim Angelus of San Francisco received nearly 20% of the votes, earning the title, “Best Food Truck” at the Festival. Stitches ‘n Dishes Co-Founders, Christopher Ford and Andrew Nicora, along with Stitch, the blog site’s mascot, will present a plaque to Angelus in recognition of the accomplishment in the next 10 days.

“We’re very happy to present our first ‘Best Food Truck’ award to Jim Angelus and his Bacon Bacon Truck,” said Ford. , “Jim possesses a certain unique creativity that we only run into every so often. He listens and responds to his customers, and he’s interactive and engaging. His mobile restaurant is a true reflection of his own personality. When you reach this level of creativity, your customers respond. It’s no surprise that he took this award.”

Launched in July, 2011, Bacon Bacon was listed in the top ten food trucks in San Francisco by the Chase Sapphire Visa Signature Eater’s Choice Awards in October and continues to take Northern California by storm.

Read about the second and third place holders at the third Sacramento Mobile Food Festival, as well as an interview with Jim Angelus in the full article at http://stitchesndishes.com/2011/12/best-of-best-add-bacon-please/

Stitches ‘n Dishes is California’s first provider of a platform that stitches a link between food lovers, entertainment venues and mobile food operators, and the first fully dedicated marketing, advertising and development resource available to food vendors in California.

Columbus, OH: This Is The Best Food Truck In Ohio