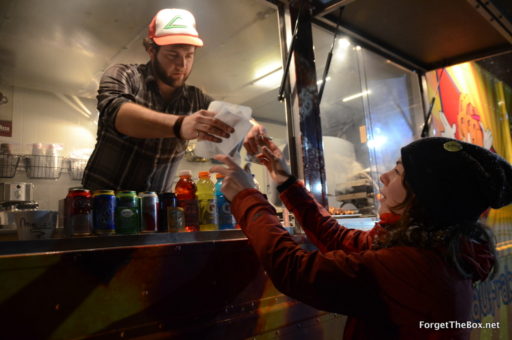 By Samantha Gold  |  Forget The Box 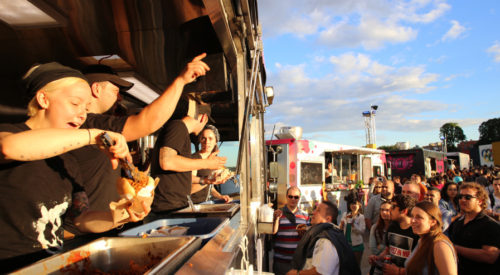 In the US food trucks are hailed as a cheaper, easier way for chefs and entrepreneurs to get into the food business. Unfortunately in Montreal, a city hailed for its festivals, parks, and diversity, getting a food truck is almost as difficult and expensive as getting a restaurant. Though other cities in Canada have had vehicles offering a variety of culinary delights to consumers, Montreal has only been allowing food trucks since 2013, finally ending a ban in place since the 40s.

In 1947 the City of Montreal banned food trucks for sanitation reasons. Attempts to lift the food truck ban were fought on cleanliness grounds and by restaurateurs who were paranoid about losing business. The city eventually came to a compromise and enacted the Règlement règissant la cuisine de rue aka The Regulation on Street Food.

The Regulation sets out rules regarding food trucks in the City of Montreal. Independent areas on the island of Montreal like Cote Saint Luc and Westmount have their own rules.

In the City of Montreal, only those possessing the proper permit can sell street food. At first glance it seems pretty simple: get a permit, get your food truck. Sadly, the process by which one gets a permit is extremely complex and costly. In order to be able to even apply for a permit, you first have to apply to a selection committee created by the city to assess applications from potential street food vendors.

The committee is comprised of two City employees and three representatives of either the restaurant business or the culinary arts. If you get a positive recommendation from the committee you can then apply to get your street food permit and in both steps of the process, the amount of documents required seems pretty absurd.

To get the committee to even look at your application you have to include not just forms, fees, and proof that your truck is fire and environmentally safe, but also a crazy amount extra information including a full menu, price list, ingredients’ list, colour photos of your dishes, the names and contact info of your food suppliers, and the CVs of the people who will be running your truck. You also have to include plans for the interior layout of the truck and any designs you plan to put on its exterior.

Have a secret family recipe? It won’t be a secret by the time the City is through with it, for though committee members are legally supposed to avoid conflicts of interest, the likelihood they’ll be objective and maintain the secrecy of applications in a city ripe with corruption is low at best. Furthermore, as per the regulation, the City gets to keep all the documents you sent in addition to the non-refundable application fee, making the temptation for restaurateurs and industry reps all the greater in Montreal’s highly competitive restaurant industry. 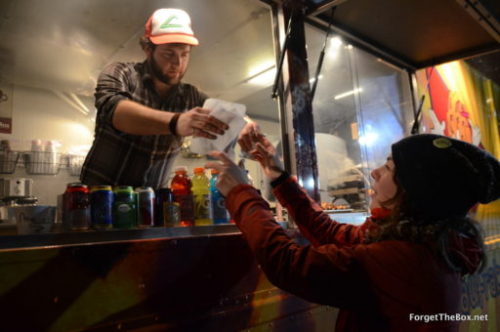 If you get a positive recommendation from the committee, you can move on to the actual permit application. In this application you have to prove that you meet Montreal’s ridiculous food truck requirements. You have to prove you have a kitchen space independent of your food truck at which the preliminary prep of the food must be made and have to provide copies of your permits, lease, and property tax assessments to that effect. You also have to be insured for physical and material damages up to two million dollars.

If all of this goes through you might be lucky enough to get a food truck permit, but your joy will probably be short lived. Food truck permits are only good for one truck and can either last for a season or a year with only one automatic renewal option. The foods and drinks trucks can sell are also outrageously regulated.

Food trucks can’t sell booze (with an exception if it’s an ingredient in a dish). They can’t sell anything “buffet-style” and any prep has to be done at your independent kitchen. Only items included in the menu you sent to the committee can be sold from your food truck.

Forget about selling hot dogs, inexpensive tacos, or plain poutines from the truck as some of the selection criteria for a positive committee recommendation include creativity, originality, and whether or not basic ingredients are transformed while making the dish.

Food truck owners can forget about competing with restaurants because they can only sell their wares in zones designated by the City, usually far away from areas with a lot of restaurants.

With all these crazy requirements, it’s no wonder food truck offerings in Montreal seem sparse and unnecessarily fancy. If you want a pogo and fries, you won’t find them in a food truck selling fish tartare and gazpacho and you can thank the City and its selection committee for that.

If you add up the cost of having a kitchen or restaurant space, the food truck itself, the equipment, the food, and the crazy application process, food trucks don’t seem worth the trouble for those wanting to break in to the restaurant business. They’re better off taking their chances on a small restaurant or going into the catering business.

This is what restaurant owners in Montreal wanted all along: the maintenance of their control over the city’s food scene, and they kept it via their sway on municipal authorities. Where food trucks are concerned, what the City of Montreal calls a compromise is just a thinly veiled attempt to maintain a monopoly.