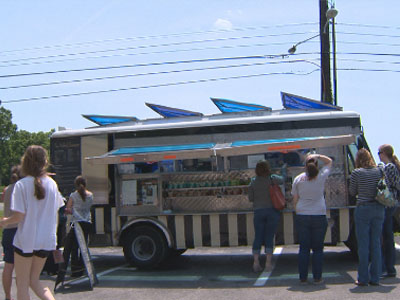 As I mentioned would be happening in my story on Nashville food trucks a while back, the Metro Traffic and Parking Commission held a public hearing today, in part to discuss the regulation of food trucks on our city streets. The M.H. Howard Conference Room of the Howard Building was quite full, with food-truck vendors — many of whom had met together before the hearing to discuss how they would present their case — well-represented.

“We welcome regulation,” said B.J. Loffback of Riff’s Fine Street Food, as he addressed the commissioners. Loffback also asked rhetorically why brick-and-mortar restaurants “deserve special protection.” (One commissioner would later comment that he, at least, was not concerned with commerce — “business is business,” he said, adding that gas stations often position themselves opposite other gas stations.) If there was a central theme to the food truck owners’ comments, it was this: Just give us clear guidelines, and we will follow them.

Several brick-and-mortar business owners also spoke, including the manager of Margaritaville downtown, who asked that the commission consider the size of the city and how many food trucks it can reasonably contain. This was in part a response to Loffback’s reference to newly adopted regulations in Seattle. Another downtown building owner cited incidents of food trucks blocking entrances to her property.

Laura Myers of Happy Eating acknowledged that food truck owners have made missteps as they learned their trade. “Please don’t penalize us for lack of judgment at the beginning,” she said. She offered Baltimore as a possible model for downtown regulations, citing food truck zones designated from 9 a.m. to 3 p.m., with no more than two trucks per street in the specified areas.

Attorney Adam Dread, speaking on behalf of a group of downtown businesses that includes Tootsie’s, said his clients represent “the middle” of the debate. While saying that vendors “add a lot to downtown,” Dread urged the commission to recognize that businesses in the area pay some $91,000 in property taxes, and offered this advice for coming up with the necessary regulations: “Take your time.” (He also requested that commissioner Brenda Sanderson recuse herself from voting on the regulations, as she is an owner of a brick-and-mortar restaurant.)

Overall, the members of the commission seemed open to a constructive discussion, and to reaching a set of regulations that are amenable to all parties. “I admire everyone out here,” commissioner Feller Brown said, addressing the food truck operators. Here, he said, were people who “put their heart and soul into their machines.”

Speaking for many of us who have tried to sort through this issue — and speaking to the need for updated regulations — commissioner Breonus Mitchell Sr. said, “I’m lost. Where can they be, and where can’t they be?” A representative for Metro Police said they plan to post draft guidelines on the department’s website in two weeks’ time, at which point they will welcome public comment.