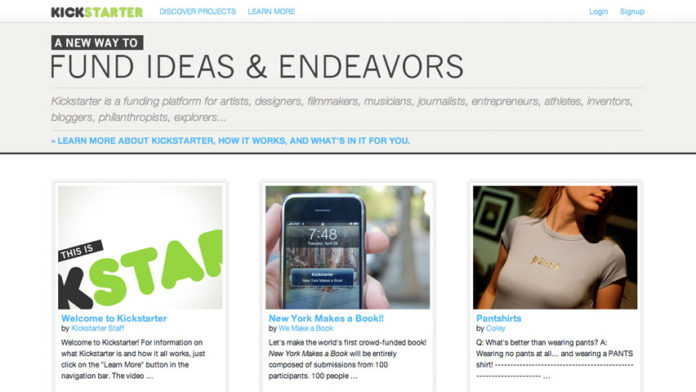 This fall, five Asheville artists and entrepreneurs received a “kickstart” from their communities through a new Internet-based campaign. With the cumulative help of 381 supporters, a total of $31,387 was raised to fund everything from recording sessions to a food truck. How? Kickstarter.com.

Founded in 2009, kickstarter.com helps artists fundraise for their creative endeavors through online outreach. Artists offer incentives for backers at various pledge levels, ranging from a poster or sticker to home-made cookies or a private house concert. Donations accrue over a period of one to 90 days, with the specific range set by the administrator. A project receives funding if the financial goal, or threshold, is met within that duration. If a project does not reach its minimum funding goal (projects can raise more), the campaign is canceled.

The Honeycutters used Kickstarter because, “we liked the format, and thought it was a cool opportunity for fans to get involved,” Platt told Xpress.” A number of people had been asking us about our second album, and the only thing stopping us from making it was capital.” Kickstarter liked the Honeycutters back. The band reached its $15,000 goal (plus $103) with the help of 86 backers.

Watson appreciated “the community-based approach that Kickstarter had,” and the way the site “made me promote and push the project more. If I wasn’t successful in reaching my goal, then no one who pledged would be charged, and all the money would go back to their pockets. That rule really made me determined to make the project a success.” Watson’s project had 28 backers, raising $3,210 (the goal was $3,000).

For Adam Strange, using Kickstarter allowed him freedom to focus more time on the art — and less on working odd jobs for funding. Adam noted his “first album was out of pocket, 100 percent. I had to play shows and wash dishes to make that record. This one was almost 50 percent fan-funded.” With the help of 66 backers, GFE raised $3,077, almost $400 more than their $2,700 goal

Recording projects have pretty clear budgetary demands: studio time, post-production, pressing records and so on. Artists in other media use Kickstarter as well — even if their final product can’t exactly be distributed.

When local painter Dustin Spagnola began the Asheville to Miami Mural project he wasn’t even thinking about fundraising. “The whole idea was just how do we get people from here to Miami, Fla., and have them have the ability to paint?” It was suggested that Spagnola try Kickstarter to fund his trip with a group of artists to Miami’s annual Art Basel event. He decided to try for a modest goal of $750. According to the Kickstarter site, the project raised $1,146 from 47 backers.

Local chef Suzy Phillips represents another side of Kickstarter that has nothing to do with albums or murals: business. Specifically, a Lebanese food truck.

“My vision is quite simple,” Phillps wrote on her Kickstarter page. “I want to serve my Asheville community and folks that come and visit from out of town a true authentic experience of Lebanese street food served from a vintage step-up van that would run on spent peanut oil from its fryers and powered by solar panels and biodiesel fuel.”

Phillips successfully raised $8,851 (the goal was $8,000) from 154 backers. “I have people that I never met before in Asheville contact me to tell me how inspiring this is for them and people can’t wait to have my food,” she remarked.

After their successful first campaign, all the artists felt that the Kickstarter site is something they would use again for future projects because it offers something more important than just the money raised.

Watson explains, “doing a fundraiser project like this not only creates a buzz and helps me raise funds, but it also gives the fans and friends a sense of being a part of the process, and it really gives everyone a great sense of community and team effort.”

Strange also found that his “friends and fans loved the campaign. It did a lot for me personally with publicity. So many people have been talking about my album, and just know it exists.”

Spagnola views his project as an act of reciprocation. “A lot of this money we raised we’re actually going to turn around and reinvest. When we reinvest it, what’s happening is we’re continuing to tell people about what we did.”

Time will tell whether the Honeycutters indeed “save world” with its second album as stated in their project title, but the overwhelming community support is inspiring. Platt noted, “People have been so incredibly supportive. Every show we’ve played since reaching our goal, and even just walking down the street or in the grocery store we have people coming up to us and saying ‘congratulations.’ The day before the drive ended it was like the last scene in It’s a Wonderful Life: [bandmate] Pete [James] and I were checking the website every five minutes and there were pledges coming in from people we hadn’t seen in years, friends, family — one of my professors from UNCA even pledged!”

“I think people got excited about a couple of things,” Phillips of her campaign, and Kickstarter in general. “The involvement of the community, the success of the project, and faith in humanity that there is good out there.”

All these Asheville Kickstarter projects are archived on Kickstarter.com, allowing backers to follow the process after the campaign is completed. At the same time, successful projects provide strong examples of the strength and possibility — and effectiveness — of community-supported fundraising.

— Wendi Loomis can be reached at wendi@jazzandpoetry.com