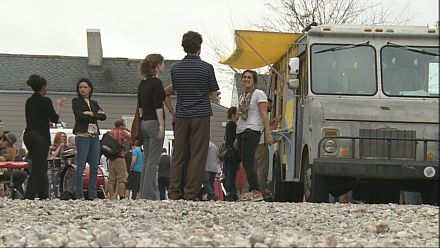 Mayor Mitch Landrieu says he and members of the City Council have introduced a new ordinance governing the operation of food trucks in New Orleans.

In keeping with the City’s commitment to update mobile food vending laws, this week, Mayor Mitch Landrieu and the New Orleans City Council introduced a new ordinance that provides fair, legal and enforceable guidelines for mobile food vendors. The proposed changes are designed to streamline the process of operating a mobile food vending business in New Orleans and to ensure that these types of small businesses are given the opportunity to succeed.

“The food truck scene in New Orleans is growing rapidly, and we owe it to these small business owners to make sure we help that growth continue,” said Mayor Mitch Landrieu. “Working with the Council and all stakeholders involved, I am confident that these new revisions will put current mobile food vendors on a level playing field and provide opportunities for more investment.”

The ordinance addresses all mobile food vendors, including stationary vendors, ice cream vendors and foot, pushcart or animal-drawn food vendors. In addition, the ordinance adds a new section that defines and provides limits for food truck vendors that are not currently defined in the City Code. Revisions include:

• Elimination of the controversial and unconstitutional provision regarding distance from an existing restaurant; and

Councilmembers Stacy Head, and LaToya Cantrell are co-authoring the ordinance on behalf of the Landrieu Administration.

Council Vice President Stacy Head said, “I am pleased with the ordinance as introduced today, as it accomplishes many of the original goals I set for updating the City’s extremely outdated mobile vending laws. For nearly a year, I have worked with the New Orleans Food Truck Coalition, the Louisiana Restaurant Association, restaurateurs, neighborhood groups, my colleagues on the Council and the mayor’s administration to improve these laws so that this micro-industry led by culinary entrepreneurs can continue to grow, contribute to our local economy, and most importantly, bring much-needed commerce to some of our underserved communities.”

District B Councilmember LaToya Cantrell said, “I’d like to thank the administration and Councilmember Stacy Head for taking leadership on supporting small businesses in New Orleans. Entrepreneurs are the backbone of our economy and food trucks are no exception. I look forward to the implementation of this ordinance and the creation of a process that supports business development and sustains the unique culinary culture of New Orleans. I am pleased to have worked on this ordinance and count myself among the thousands of New Orleanians who enjoy food trucks.”

Rachel Billow, President of the New Orleans Food Truck Coalition said, “We are very excited about this set of proposed changes, which will allow us to operate our businesses more effectively and successfully. The food truck industry offers a great opportunity for culinary entrepreneurs to develop their own businesses without such substantial start-up capital as required to open a restaurant. They also add to our city’s culinary scene, offering quick, inexpensive options in locations or time frames (e.g., late-night) that lack affordable gourmet cuisine.”

In addition to small business opportunities for operators, food trucks also fill a void in areas of the city known as “food deserts.” The new law includes the ability for food trucks to apply to operate in areas that they are currently not allowed in, such as residential neighborhoods.

Under the new revisions, food truck operators will be required to obtain a permit and/or franchise agreement with the City. Certain commercial areas, such as the southbound side of N. Rampart between Esplanade and Canal Street; and Elk/Loyola between Cleveland and Howard Ave., will be available for use by simply obtaining a permit.

Other areas of the city, such as the Central Business District, will require a franchise agreement. A franchise agreement will allow food trucks to operate in areas that they are currently not allowed. Franchise agreements will require an application for a specific location on specific days and times to the Department of Public Works (DPW). DPW will perform a traffic engineering analysis and issue a recommendation to the City Council. The City Council will determine if a mobile vending franchise ordinance should be approved. There will still be areas of the City, such as the French Quarter, that will remain prohibited.

It is not clear from the news release when the full council might vote on the ordinance.