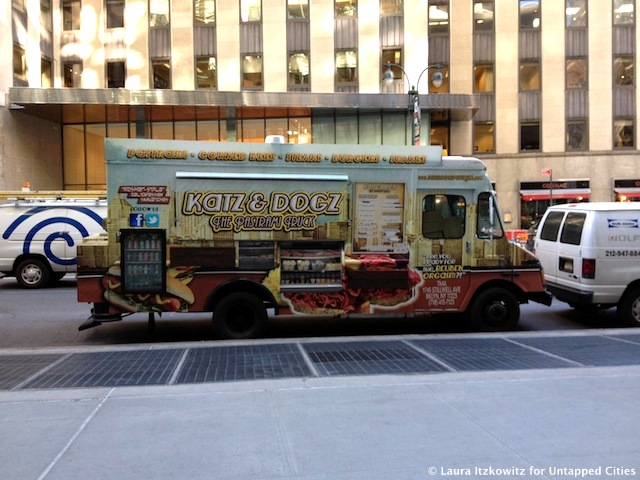 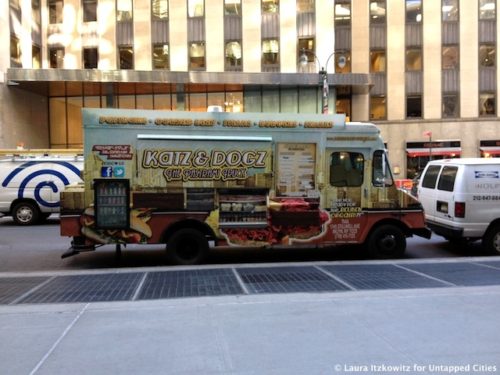 We spotted the Katz & Dogz pastrami truck in Midtown yesterday before the lunchtime rush. The truck serves–you guessed it–Katz’s Delicatessen style pastrami sandwiches and Hebrew National hot dogs. It also doles out corned beef, salami, burgers and something called the Reuben Orgasm (probably inspired by the famous scene in which Meg Ryan fakes an orgasm at Katz’s deli in Harry Met Sally). If the oversize sandwiches aren’t enough, you can get a side of cole slaw, potato salad, a potato knish or fries.

Despite the name and the menu, the Katz & Dogz truck is not actually affiliated with Katz’s Deli, which is celebrating its 125th anniversary this year with a pop-up gallery and shop. The truck is operated by Adelman’s Deli in Brooklyn–owned by Mohamed Salem, a Muslim from Egypt. Though the Brooklyn deli is strictly kosher, the truck is not, meaning you can get cheese on your sandwich.

We weren’t able to find the truck’s Facebook page, but you can follow it on Twitter@KatzNDogzTruck to find out where it will be parked next.