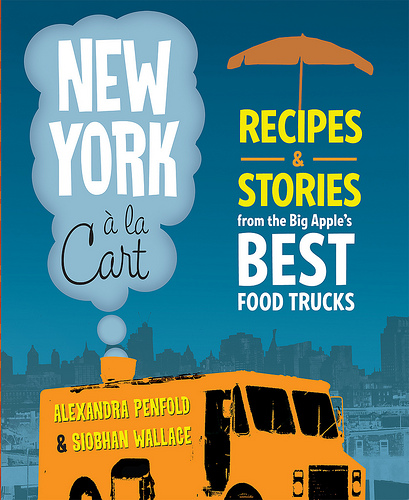 By Dan Myers |  The Daily Meal

For the past two years, Siobhan Wallace and Alexandra Penfold, the duo behind the popular blog Blondie and Brownie, have been on a mission to track down the stories behind some of New York’s most popular food carts and trucks, and the fruit of their labor, New York a la Cart, will be hitting the bookshelves April 2.

In the book, 50 vendors are profiled, and recipes from (or inspired by) their cart’s offerings are made available, in many cases for the first time. Vendors range from the popular “Dosa Man” of Washington Square South to the Biryani and Hallo Berlin Carts in Midtown to the city’s most popular roaming trucks, including Wafels and Dinges, The Cinnamon Snail, Mexicue, and The Big Gay Ice Cream Truck. They even venture out to the Red Hook Ball Fields to chat with the owners of the Solber Pupusa cart.

In chatting with the owners of these carts and trucks (in many cases they just walked up to them and introduced themselves), certain similarities between them became apparent. “What was similar was that at a point in their lives they all had the decision to go left or right,” Wallace told The Daily Meal. “Some had gotten laid off, some had been wanting to open a restaurant but were unable to, but they were all at a turning point in their lives and needed to make a decision.”

And while it’s far from easy to operate a food truck or cart, all the vendors agreed that it was a rewarding experience. “They all love their customers, and serving people; it’s why they wake up in the morning,” Wallace added. “They’re not making a lot of money, they’re out in the elements, they’re dealing with cops and competing vendors, but at the end of the day it comes down to their desire to make people happy.”

And if you’ve ever been starving through a busy day only to find salvation in a steaming Styrofoam container of chicken and rice, you’ll most likely agree that they made you happy.