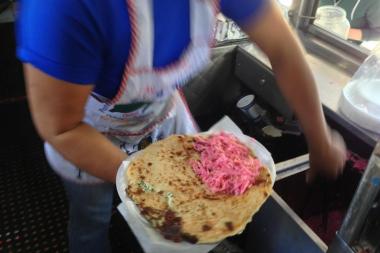 SUNSET PARK — Fried anchovies served in a shot of paprika aioli, Nutella pizza pies coated in powdered sugar, and scoops of blueberry and mojito sorbet. These were just some of the delectable dishes served up by New York’s favorite food trucks and market vendors in the heat of competition at the 9th annual Vendy Awards on Saturday.

But all the others got served — and by a veteran truck at the Vendys — when Red Hook’s much-loved Salvandorian pupuseria El Olomega took the coveted Vendy Cup on Saturday night.

The win means that Red Hook trucks have scored the cup four out of the last five years at the contest, according to the organization that runs the contest, New York Street Food.

Lines formed quickly in the early afternoon, and the large lot at Industry City filled with hungry food truck lovers who paid upwards of $95 to experience the ultimate in street corner cuisine.

Finalists competed for the sought after Vendy Cup, as well as Best Rookie, Best Dessert, the Best of New Jersey and People’s Taste awards.

The feasting began at 2 p.m., and shortly after 7 p.m. the winners were announced: Itizy Ice Cream won for Best Dessert; Khao Man Ghai won fro Best Market Vendor; Home by the Range won in the Best of New Jersey category, and Rookie of the Year went to Nuchas.

Among the most popular with peckish perusers was Vendy Cup competitor Luke’s Lobster — which wound up taking the People’s Taste Award — offering lobster rolls and grilled cheese triangles stuffed with lobster.

Another food truck throwing down the gauntlet for the Vendy Cup was former champion Souvlaki King from Astoria, which has been serving up souvlaki, a Greek rotisserie and pita snack, since 1979. Owner George Tsampas was confident of his chicken and pork souvlaki wowing the judges and winning the cup.

Just as popular were farmer’s market stalwarts Bon Chovie and Porchetta. Bon Chovie offered up their infamous anchovy shots: a fried anchovy, head on or off, to be chased with a paprika aioli and slice of lemon. Next to them, Porchetta provided the turf to Bon Chovie’s surf with a pulled pork baguette.

The awards are run by the Street Vendor Project at the Urban Justice Center, which aims to raise awareness of street vendors and food trucks in the city.