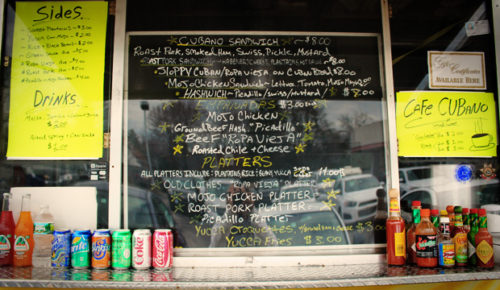 Roberto Baez was burnt out.

For more than a decade, the native Long Islander of Cuban heritage had worked as a chef—half that time head chef—within the kitchens of various popular restaurants, manning the grill, overseeing orders and directing staff.

About two years ago he decided to jettison that exhausting lifestyle—and a good chunk of money—for a chance at a new beginning, taking his uncanny knack for concocting mouthwatering Caribbean on the road, literally.

Baez hopped on a plane to California and drove from San Diego to San Francisco, soaking in the sun, making pit stops along the way, all the time inhaling the fresh aromas of gourmet food wafting from the Golden State’s fleet of mobile food vendors.

That’s when it hit him.

“Food trucks are popular,” the 30-year-old recalls, relaxing outside his Rollin’ Cubans food truck, parked just west of Rte. 106 on Old Country Road in Hicksville. “[But] you don’t see them on Long Island at all.”

So, defying the fierce competition that defines the LI food industry, Baez decided to roll the dice, opening up his kitchen-on-wheels last July.

“In the restaurant business your lifestyle is sacrificed for money,” he says. “I’d much rather sacrifice money.”

Featuring painted flames curling upward from its wheel wells and large, bold purple lettering above its windshield proclaiming “Eat Cuban,” Rollin’ Cubans should probably be parked outside a crowded Miami nightclub. Instead, it’s adding a dose of culture and flare to an already-diverse Hicksville neighborhood.

And it’s popular—despite being in operation for under a year, Baez’ roving eatery has nearly 1,000 “likes” on Facebook.

Though Long Island is lightyears from becoming a food truck haven—you can’t go a block in Manhattan without seeing a mobile hotdog vendor or Halal meat truck, which isn’t the case here—there are hints the nationwide food truck craze may be catching on in Nassau and Suffolk counties.

Several food trucks were parked outside Tanger Outlets at the Arches’ outdoor shopping mall in Deer Park last month for its Taste and Style event. In Long Beach, which was all-but decimated six months ago, compliments of Superstorm Sandy, there’s currently an effort to breathe some life into the city’s rattled business community by opening a Food Truck Market at the end of Riverside Boulevard and Shore Road, starting this month.

“One of the things that we heard loud and clear from our residents was they were looking for more opportunities to have food near the beach,” says Long Beach City Manager Jack Schnirman. “Hence, the food truck initiative.”

“It’s going to create an oasis for the neighborhood,” adds Sugo Café owner Alan Adams, one of the Long Beach merchants taking advantage of the city’s plan. Adams’ truck, dubbed Beach Buns and Bites, will offer sliders, burgers and even some fresh seafood.

There’s no telling what a successful food truck can lead to in the future.

Joe Bui’s Rolling Spring Roll food truck, which serves Vietnamese dishes, inspired him to go all-in and open an actual restaurant. He’ll still be operating the food truck, but away from the restaurant, which remains as-yet nameless.

“I did have a great following,” he says, “people did like Vietnamese food and I wanted to bring it out more.”

Food truck operators admit that the food-on-wheels lifestyle also comes with some hard-to-swallow challenges—some so difficult to overcome that they forced 42-year-old Liam Beardslee, who sold tacos out of Lumpy’s Food Truck in Bay Shore, out of the business.

Baez, who is Cuban on his father’s side, begins each day early in the morning. He walks his dog, then spends the next four hours preparing empanadas, roast pork and Ropa Vieja, while also readying several Cubano sandwiches for the lunchtime rush. It’s common for him to find a long line forming at the curb as he’s pulling up.

The Cubano Sandwich, the most popular item on the menu, is stuffed with roast pork shoulder, cured ham, Swiss cheese, pickles and mustard. Baez presses the sandwich on the grill and repeats the process constantly during a busy day.

“Cuban [sandwiches] at other places…[aren’t] as good,” says 27-year-old Benjamin Gutt, visiting Rollin’ Cubans for the second time that day. “You can take the meat off the sandwich and eat it and it’s amazing. Just everything about it is good.”

Baez also prepares custom dishes. One of his regulars asked him to add Ropa Vieja and plantains to the Cubano sandwich, for example. The patron enjoyed it so much that he named it the “Super Cuban,” Baez laughs.

Sure, there’s been road bumps along the way for Baez. Sandy crushed business, and winter forced him to close shop for nearly two months. But Baez is back in Hicksville, and he’s preparing for what he believes will be a busy summer.

But Long Islanders interested in roadside Cuban cuisine will have to be patient, he warns.

“I hate to make people wait,” says Baez, “but at the same time, if you want something good, it’s worth waiting for.”