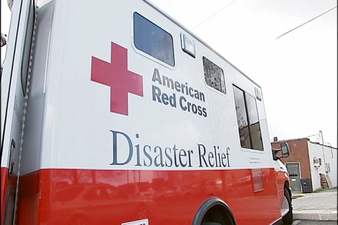 QUEENS, N.Y. — Take the Spirit of America mobile kitchen, a stockpile of nourishing food and a corps of committed volunteers and you have a recipe for disaster relief.

“Spirit of America is cooking out some awesome, hot food for the folks,” Jim Plympton told us.
He is a Red Cross volunteer from the Roanoke Valley, who set aside his pressure washing business to man the mobile kitchen in New York.

“I’ve been volunteering with the Red Cross since ’84, 28 years,” Plympton told us Wednesday morning. “It’s just the most important thing I think of to do.”

And he’s not alone.

Southern Baptists from Ohio, Michigan and Virginia were cooking the meals when we visited. Emergency response vehicles came from Washington, DC, Gainesville, Georgia and many other communities. And the American Red Cross had brought in volunteers from across the country.

The operation at Fort Tilden is one of four kitchen sites set up in the region. So far it has prepared more than 150- thousand meals, and  Red Cross workers have delivered them in the coastal communities nearby.

David Winchester is an Ohio volunteer with the Southern Baptist Disaster Relief organization. “It’s satisfying to know that even without the lights on, even without gas stations,” Winchester told us, “we can come in, we can set up in a field, in a parking lot.”

Church volunteers from Virginia are lending a hand. Janet Clay lives in Rockville near Richmond. “I feel like I need to help,” she said. “This is my fifth deployment for disaster relief and I just feel there’s a need.”

Each disaster is different. Hurricane relief is rare this late in November, but the volunteers we met were prepared to spend the holiday away from home.

“This is where I need to be this Thanksgiving,” Jim Plympton told us, “so hopefully we won’t be here too awful long, but we can get back, maybe Christmas at home.”

The American Red Cross and the Southern Baptist Convention didn’t let the holiday pass without a traditional taste of Thanksgiving.  On the menu Thursday, sliced turkey and gravy, corn bread dressing, mashed sweet potatoes, and a slice of apple pie.