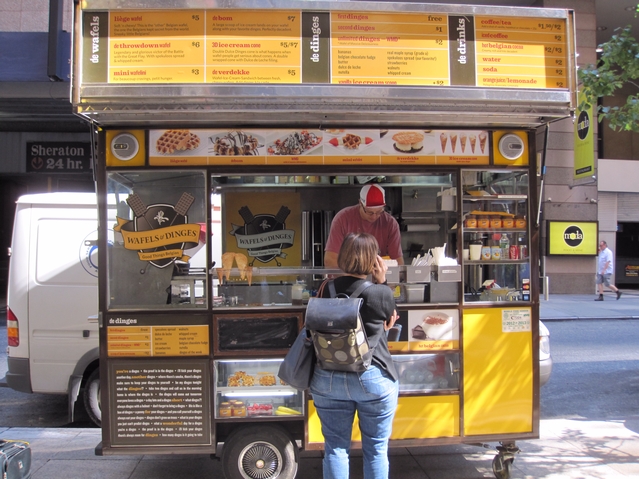 MIDTOWN — Driven by police from popular blocks across Midtown, food truck drivers and their fans are struggling to find ways around a crackdown that’s threatening to take the wheels off the burgeoning industry.

For more than a month, police have been booting trucks from Midtown under a new interpretation of the city’s vending law that says they’re no longer allowed to operate from metered spots.

But while some have chosen to pack up shop in search of friendlier pastures, others are looking for new, creative ways to keep their legions of lunchtime fans satisfied without the threat of run-ins with police.

“The truck has been chased away,” lamented Bert Meyfroots, of the popular Wafels & Dinges Belgian waffle truck, which has received about half a dozen warnings from police in recent weeks to leave its long-established Friday spot on West 52nd Street between Sixth and Seventh avenues.

But instead of packing up, the team has swapped its famous yellow truck for a smaller food cart that now makes its way around the borough, sitting on the sidewalk instead of the street.

“Right now it’s the only way because food trucks aren’t allowed in Midtown,” said Meyfroots, 40, of the cart, which the company’s website boasts “is not really a truck” but “thinks it’s a truck” and “acts like a truck.”

Company owner Thomas Degeest, 41, said he is among the lucky ones since he already has four carts in his fleet, introduced last year to use in locations like the South Street Seaport and Central Park.

But Degeest said that while they allow him to keep serving up Midtown, the carts have serious drawbacks.

“It is a lot of hassle. The pushing, the pulling, the trailering, the hooking up,” he said. “At some point there’s going to be a threshold. There’s only so much hassle everyone can put up with everyday.”

The carts are also significantly smaller than the trucks.

For others hoping to stick with their wheels, the key has become avoiding stretches where police have been on high alert.

Many trucks that used to favor spots in the low 50s between Fifth and Seventh avenues are now moving east toward Park Avenue, north to Columbus Circle and south toward the Flatiron District, said food truck expert Perry Resnick, who runs the popular New York Street Food blog.

He said trucks have also begun shifting their hours to dinnertime and relying more on corporate and special events to supplement their costs.

Drivers are also trying to stay under the radar, making sure multiple trucks don’t crowd the same blocks and being more careful about broadcasting their locations on Twitter, which many trucks use to connect with fans.

“We’ve definitely kept a lower profile recently,” said Hannah Voss, 27, part-owner of the famous Schnitzel & Things food truck, which is among those that have moved east toward Park and Lexington avenues.

“We’re a small business, so we’re trying to survive,” said Voss, who said that, so far, many of her loyal customers have been following her to the new spots.

But for others, like Kim Ima, the owner of the Treats Truck — one of the city’s very first gourmet trucks — the change has been a tremendous blow.

“I’m on the verge of tears,” said Ima, who announced late last month that she would be leaving Midtown permanently after four years on the road. She has received back-to-back police warnings.

“They just said, ‘You can’t come here anymore. The trucks are not allowed to be here anymore,'” said Ima, who said it took her months to scout the ideal location and years to cultivate her loyal following.

Now, she said she’s stuck, spending three hours circling one recent afternoon, trying to find a spot before giving up.

“I love my business and I love my truck,” said Ima, who wonders whether she’ll have to scale back to her brick-and-mortar store now that her profits have fallen to a quarter of what they used to be.

Resnick, who also runs a Midtown street food tour that used to make its first stop at the Treats Truck, said he loves Ima’s Mexican chocolate chip brownies so much that he’s been traveling south before his tours start to find her and buy a batch ahead of time.

For other loyal food truck eaters, more departures would be a shame.

“It’s too bad because I think this has really added something to the city which is a lot of fun,” said Upper West Side resident Catherine Collins, 49, a long-time fan of Wafels & Dinges and other trucks in Midtown.

“It’s really unfortunate, I think, not just for New Yorkers, but for people that are visiting,” she said.

Fans of the food trucks are also trying to pitch in with a new Facebook page, which has  62 “likes” and urges Mayor Michael Bloomberg to “stop harassing food trucks.”

Others, including commentators on the popular food blog Midtown Lunch, have threatened to boycott brick-and-mortar businesses to show their support.

But drivers say what’s needed is a real solution that balances the needs of the growing industry with building owners and other local businesses who often see the trucks as competition.

Degeest suggested limiting the number of trucks that can operate on the same block. Others want more permanent spots, like the parking lot under the High Line.

“We would love the city to really welcome the food truck community like in L.A.,” Voss said.