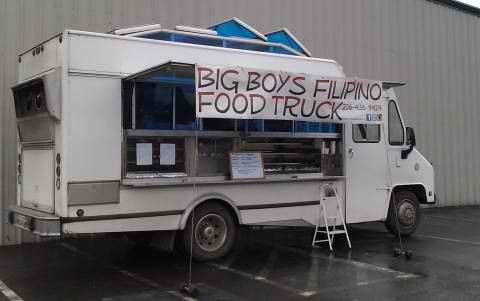 The grating chill blew in sideways through the window on the Big Boys Filipino food truck, but the couple working inside didn’t seem bothered much. My teeth chattered and I winced at taking my hands out of my pockets to fetch my credit card. Such is life for a hired belly researching mobile food businesses in January. In January? Yeah. January. Although most of us think of May-October as the more sane food truck season, plenty of trucks and carts operate year round in South Sound. Yesterday, I wrote about Jay Dogs, a hot dog cart that set up shop Nov. 1 on Center Street. Today, I’m taking a bite out of the Big Boys, which opened just a few months ago in Pacific.

A mostly industrial neighborhood in Pacific might seem an out-of-the-way location for a food truck, but Big Boys Filipino owner Nate Daep grew up in Pacific, surrounded by family that still lives there. He’s the one who takes orders out of the side of the enclosed food truck. Fiance Melanie Querubin is the one at the grill making sandwiches and burritos stuffed with Filipino flavors. This is a first restaurant for both, although they’re experienced in the food business.

The truck morphed out of another business. Daep and Querubin bought a catering truck with a delivery route serving Sumner warehouse workers. They balked at paying the high fuel costs of a mobile dining route, so they flipped the truck to be stationary a few months ago. They found a permanent home in a neighborhood that’s unexpectedly a pretty good eating-and-sipping destination – nearby are Brank’s Barbecueand Northwest Brewing Co. (formerly Trade Route).
Daep described their style of mobile cuisine as a portable translation of the Filipino cuisine he grew up with. They use Filipino sweet bread rolls – pandesal – as a sandwich bun ($6) for fried tilapia seasoned with a sweetened garlic vinegar. Inside a grilled tortilla, they stuff the Filipino meat dish adobo ($7, chicken adobo) with garlic-tinged rice and eggs. Diners also have a choice of steak and longanisa sausage for burritos and sandwiches.
Much of what they do is from scratch, including making their own sausage from pork butt and hand breading the tilapia. They’ve also added lumpia to the menu. The fried rolls are a Filipino cousin to the Chinese egg roll, only made with a much more crispy wrapper and stuffed with ground meat and vegetables. Their lumpia are more of a bite than a roll – they’re 10 for $5. If you get anything, make it the tilapia sandwich. The truck also has a breakfast menu. True to its name, portion sizes are perfect for the big boy crowd.

So what about that other Filipino food truck that until two weeks ago operated twice a week on the University of Washington Tacoma campus? Lumpia World has stopped serving its lumpia and rice plates on campus after the truck’s temporary health permit expired and the truck has not been able to make necessary upgrades to secure a permanent health permit. Lumpia World owner Derrick Ellis said he believed his temporary permit was still valid up until he stopped serving two weeks ago, but according to health department and university officials, it had expired. Tacoma- Pierce County Health Department spokeswoman Edie Jeffers wrote by email that Ellis had been working with the health department to secure the permanent permit. At issue was the size of a water tank that Ellis said needs to be five gallons bigger.  Ellis said he’s committed to fixing the required tank size problem, as well as finding a required commissary kitchen before the start of the Tacoma Farmers Market season in May. He plans to return and serve at the Broadway market as he has done in the past. Jeffers confirmed Lumpia World had operated with the appropriate permits for past farmers markets. The other trucks mentioned in yesterday’s and today’s blog posts – Big Boys and Jay Dogs – both hold the necessary permits from the health department. Lumpia World, according to the King County Health Department, is operating with a valid health permit at its King County locations – it serves at different sites from Federal Way to Seattle.

Our pledge to readers: Sue Kidd dines anonymously and The News Tribune pays for all meals