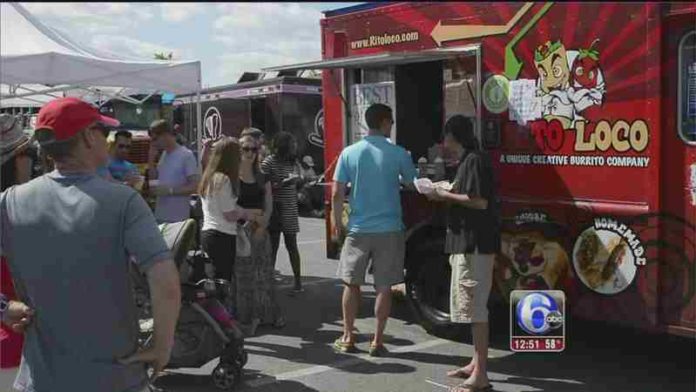 “Coast to coast there is a love affair with food trucks. People have a crush on them,” says Rob Mitchell, Vice President of the Philadelphia Mobile Food Association and owner of the Cow and the Curd food truck.

The Taste of Three Cities is a competition that pits Philly’s food trucks against trucks from Baltimore, Maryland and Washington, D.C.

The festival was in D.C. last weekend and will be in Baltimore on June 6th.

It began as the Taste of Two cities with food trucks from Baltimore and Washington, D.C. coming together.

But this year Philly decided to join the party.

“Let the people of Philadelphia experience food trucks from other cities,” says Damian Bohager, Founder of the Taste of Three Cities.

Sixty food trucks will converge at Xfinity Live! in South Philadelphia next Saturday, competing head to head for their hometowns.

Judges will consist of local celebs and food experts.

“The truck that wins best overall food truck in that festival, the Mayor presents the trophy to them and they take that trophy for a year, come back next year and see if they can defend their title,” he adds.

There are also cash prizes in multiple categories!

It’s a competition for the trucks and an all-out feast for festival goers.

“We have everything from BBQ to bakery items to Wisconsin Cheese curds to Egyptian food to dumplings. You name it we have it,” says Rob Mitchell.

“I can’t tell you how many more food trucks we had join the association this year, and how many new food trucks you are seeing on the street what high quality they are, and the kind of cuisine that comes out of them. And it’s really exciting,” says Mitchell.

And it’s all for a good cause. Proceeds go to Philabundance, helping feed the needy in our area.

“The spring and the summer is a time when not a lot of people think about hunger and think about people who are hunger-insecure. And so for each dollar that this event brings in, we’re able to provide two meals to people who need it in the Delaware Valley,” says Stefanie Ark, Senior Manager of Communications at Philabundance.

The May 9th event will run from noon until 9 p.m. at XFinity Live! in South Philadelphia.

Along with the food trucks there will also be beer, wine and live entertainment throughout the day.

You can buy tickets To the Tale of Three Cities Food Truck Festival at:http://www.ticketfly.com/event/811621