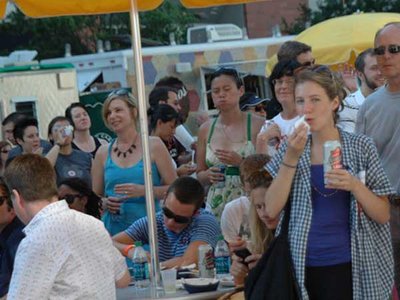 The Vendy Awards will assemble 18 of the city’s best food trucks and vendors for a friendly showdown at Penn Treaty Park from 2 to 6 p.m. Saturday. It’s a benefit for The Food Trust. And I can get you a discount: Tickets are $55 until 5 p.m. Friday, June 7, but if you use the promo code klein, it’s $10 off. There will be a limited number of tickets at the door for $60. A ticket gets you unlimited food and beverages.

John Bucci of John’s Roast Pork – who beat cancer – is holding a bone-marrow registry drive and fund-raiser auction from 10 a.m. to 3 p.m. Saturday, June 8 at the luncheonette, 14 E. Snyder Ave. Registrants get $5 off a sandwich, which is donated to the cause. For contributions, go here. To see his remarkable story, go here.

Trax Restaurant & Café, the BYOB along the train tracks in Ambler, is now open on Saturdays starting at 7:30 a.m., a good thing if you’re headed to the Ambler Farmers Market. Early birds can get pastries (by slice & whole), coffees from Chestnut Hill Coffee Company (by the mug & pound), house-smoked salmon on bagels and “to go” dinners.

Southern Cross Kitchen in Conshohocken offers two Sunday family-style dinners ($25) for four or more. One is based on snow crab legs and other is based on buttermilk fried chicken.