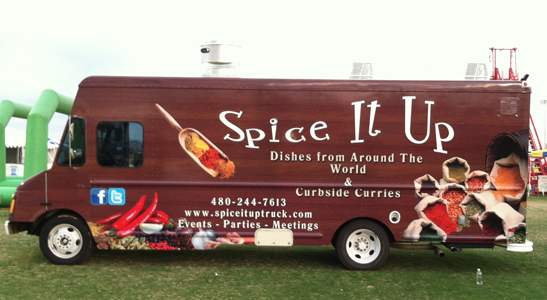 If the best things come to those who wait, then chef Chris Paciora is the perfect example. The Phoenix native stayed home to raise two kids before officially opening her food truck, Spice It Up, in 2012. From a distance, her mobile eatery looks like a UPS delivery truck with exotic spices painted on the side. And Paciora’s menu features a whirlwind tour of global dishes, from Jamaican jerk chicken to Thai red curry and Greek lemon chicken wrap. True to the truck’s name, Spice It Up’s entrées often induce tears.

Paciora shares the mobile kitchen with longtime friends Keri Frazier and Nicole Mellor — and the trio also shares the rewards. After several years on the streets, Spice It Up has become a beloved local food truck making regular stops across the Valley.

Paciora recently was selected to compete on The Great Food Truck Race, a reality game show aired by the Food Network. On the show, street food chefs travel the country and compete against each other in multiple cities. Paciora appears on the sixth season, which will begin Sunday, August 23. The network keeps its contestants tight-lipped about the show’s details, but Paciora talked with us about Spice It Up and her impending reality stardom.

You waited a long time to open Spice It Up. What inspired you to start?
I’m from a family that was really into food, and food was a big part of my upbringing. That’s why I was so passionate about it. When I was with the kids, I did everything I could to do things with food. I did theme parties. I did cooking demonstrations. We would have theme nights, so my kids would grow up with different types of food from around the world. I felt very stifled because my kids came first and my husband’s business came second, but then I said, “It’s my time now.”

You’ve stuck to your food truck instead of opening a brick-and-mortar restaurant. Why?
I think a lot of people go into the food truck industry because it’s cheaper. Well, you think it’s cheaper. But a lot of [these businesses] are very expensive. They want to try the concept, but they don’t realize how hard it is. That’s probably why a lot of them don’t stay around very long. But I love it.

Historically, people have been suspicious of food trucks as cheap and unhygienic. How is that perception changing?
When I first started with the [Phoenix Street Food Coalition], there were only 30 trucks. Now there are, I don’t know, 100 trucks. It’s absolutely exploded. It’s made a huge difference. People used to refer to them as “roach coaches.” Now people are turning out beautiful, beautiful food. They’ve really evolved. It’s amazing.

How did you end up on The Great Food Truck Race?
They contacted us, and it went from there. To me it’s a dream come true. I’m a big fan, and I’ve been watching it since the beginning. I watched the first episode years ago. I sat and watched it with my son. My truck was being built at the time. And I said, “One day, I’m going to be on that.”

Reality TV is a peculiar environment, and it gives everyday people national exposure. How did you feel about it during filming?
It’s the chance of a lifetime. It’s an unbelievable experience. I cannot even put it into words. I will never be the same. I had done some local work — cooking demos on TV. But one of the commercials aired last night, and of course the texts were going off like crazy. I missed the commercial, but I’m looking forward to seeing the show. I don’t know, I’m scared, but I’m very excited at the same time.

How do you think the show will affect your craft and reputation?
I’ve watched through the years what [the show] has done for other trucks. I anticipate it will be very good for us. I know you have to be proactive about it. I have other things in the works, different directions I can go with it. I’m ready to go.

What did you learn from your great American road trip?
Before I went, if people had asked me to come to Tucson or more than an hour away [from Phoenix], I would think, “I don’t know if my truck will make it.” But I learned how strong my truck is, and I learned to trust it.

Any favorite stops along the way?
All of ‘em.

For more information about Spice It Up, visit spiceituptruck.com.