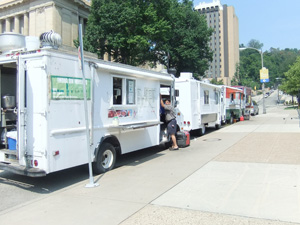 The election is finally over. Whether you’re celebrating, enraged or just relieved not to have to suffer through yet another campaign ad, let’s forget about the divisiveness of politics and focus on something that we can all appreciate for its diversity and differences: food!

For the past several years, chefs across the country have been putting their food on wheels and hitting the streets in gourmet food trucks. This delicious trend has made it here to the Steel City, and if you haven’t had the opportunity to visit one of these mobile kitchens, find one immediately.

Unfortunately, that will prove difficult. Compared to similarly sized cities, Pittsburgh has very few food trucks. This isn’t because of the city’s climate, or its hilly terrain — but its laws.

In Pittsburgh, trucks may not park at metered spaces, cannot stay in one place for more than 30 minutes and are forbidden from operating within 500 feet of a restaurant that sells similar food. These and other restrictions make it nearly impossible to run a successful food truck, and less competition means higher prices and fewer lunchtime choices for workers throughout the city.

These laws aren’t just keeping food trucks away from you. They are also unconstitutional. Laws like Pittsburgh’s are frequently passed at the behest of a few brick-and-mortar restaurants that want the government to “protect” them from the competition posed by mobile counterparts. But having the city pick winners and losers is not a legitimate use of government power, and courts that consider similar laws routinely strike them down.

Fortunately, Pittsburgh Councilman Bill Peduto has introduced legislation to fix the city’s food-truck laws. Also fortunate is the fact that many Pittsburgh restaurants are rallying around food trucks, embracing these new mobile kitchens as welcome additions to the city’s thriving culinary scene and a new way to reach their customers.

Pittsburgh should embrace food trucks. They put people to work, enrich communities and serve as “eyes on the street” that help make public rights-of-way safer and friendlier. Some brick-and-mortar restaurants may argue that trucks threaten their businesses but cities that have good food-truck laws also have vibrant restaurant scenes. Food trucks aren’t “unfair competition,” because any advantage that a food truck’s mobility might provide is more than offset by its many disadvantages, including no seating, no climate control, no extra storage space and no booze.

Governments have a role to play in regulating trucks, but it should be limited to ensuring public health and safety. Food trucks should be allowed to operate wherever their presence won’t cause excessive congestion. They should be required to be sanitary and safe, just as restaurants are. And they should be responsible for the litter they generate. These are legitimate regulations that the government has the right to impose; everything else should be wiped clean from the Pittsburgh city code.

So why should you care about where and when food trucks can operate in Pittsburgh?

The first and probably most obvious reason to the hungry reader: More choices!

The second and more fundamental reason: These seemingly small, local issues are what define us as a nation of opportunity, a place where entrepreneurs of all stripes can try to climb their way up the economic ladder. We can’t allow the government to cut the ladder out from any entrepreneur, big or small, stationary or mobile. Nobody should be subject to arbitrary, anti-competitive and unconstitutional abuses of government power.

Small enterprises represent big dreams. Eat a hot dog at Franktuary or a pierogi from the Pierogi Truck. While you’re enjoying your food (and you will), talk to the owners about their struggles to succeed — especially with so many roadblocks in the way — and their aspirations to grow.

Now, back to that election. It’s easy to feel as though your impact is lost in the race for the president. But you can have a very real impact at the local level — by becoming a champion for your entrepreneurial neighbors, starting with food trucks. Make a phone call to City Council. Sign a petition (you can find one at www.pghmobilefood.com). These small actions can produce demonstrable, satisfying change.

Support Pittsburgh’s food trucks and help them make their way up the economic ladder — and hopefully, to a curb near you.