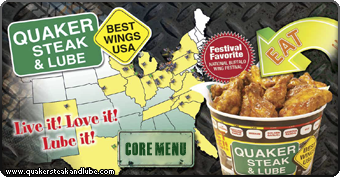 It wouldn’t be a true Lube original without careful thought into the marketing and presentation,
“Giving this promotion the name of “LICNZ 2 CRAV” mimics a vanity plate and gives a nod to our motor sports theme brand elements. We wanted the presentation to really create buzz, so servers bring the cupcakes to the tables on license plate shaped trays. You can buy the entire tray of 4 or purchase them individually,” explains Marla Pieton, Quaker Steak & Lube®’s Senior Director of Marketing.

While Quaker Steak & Lube® is known for its Best Wings USA and over 20 sauce varieties, Lubies have been amped up to try these personal size confections. Each cupcake has a flavor filled center and has sculpted icing topped with a treat. Quaker Steak & Lube® reports over 20,000 cupcakes have sold since June 21, 2011. One of the most popular being the PB&J Traffic Jam, and why not? With Americans consuming an average of 1500 PB&J sandwiches before they graduate high school, and $800 Million spent annually on Peanut Butter, Quaker Steak & Lube® attributes the high sales to nostalgia.

“We began in 1974 and as the brand grows nationally we continue to stay true to our ‘Fun Family Dining’ environment. Spanning the generations Lubies and Lube staff members all of have one thing in common – a love of having great times and building lasting memories.” continues Pieton.

Just in time for Back To School these delicious treats won’t break the bank at just $1.99 a piece. Too full after your meal? Take them home for later – what kid wouldn’t be the envy of the lunchroom when they hoist a Quaker Steak & Lube® cupcake from their lunch box?
_ _ _ _

Today, The Lube® has over 40 locations nationwide and has won more than 100 national and international awards for their wings and sauces. Most recently, Quaker Steak & Lube® was voted Festival Favorite at the 2010 National Buffalo Wing Festival. For more information about Quaker Steak & Lube®, please visit http://www.quakersteakandlube.com.

About Quaker Steak & Lube®:
Founded in 1974 and built in an abandoned gas station in Sharon, Pa., the original Quaker Steak & Lube® began as a cook-your-own steak restaurant, before expanding to over 40 locations throughout the United States and Canada. The unique décor, including race cars suspended from the ceilings, motorcycles, Corvettes and gas station memorabilia, combined with the crave-able food and high-octane events has afforded The Lube® a cult-like fan following. Today, Quaker Steak & Lube® has become one of the fastest-growing restaurant chains in the country, and has won hundreds of national and international awards for its wings and over 20 different wing sauces. Most recently it was named the 2010 Festival Favorite at the National Buffalo Wing Festival in Buffalo, New York. For more information visit http://www.quakersteakandlube.com.