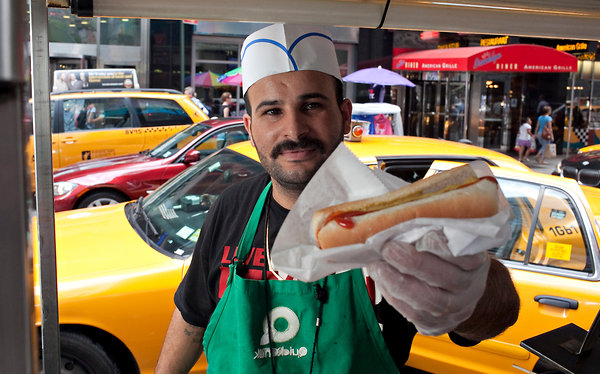 GET this: There are children in New York who have never eaten a hot dog.

Seriously. A couple of them showed up in Central Park the other day.

Andrew McDonnell, the entrepreneur behind the Good to Go Organics carts that have begun popping up in the city, was standing next to one of his three wiener stands and talking about the provenance of the toppings that grace his organic dogs. The grass-fed beef for his chili comes from Kinderhook Farm in Columbia County, N.Y. The sauerkraut, which Mr. McDonnell’s team picks up in person at the Union Square Greenmarket each week, hails from another Hudson Valley grower, Hawthorne Valley Farm.

As Mr. McDonnell talked about how “people in general are just looking for a better quality of food,” a young Manhattan mother ordered her two children what she said would be the first hot dog they had tried.

Another mom, Shephali Gupte, lined up with her two children moments later and said that in her household, too, the street dogs that had won her stamp of maternal approval came from Good to Go Organics. “I’m a big fan of street food, but it has to be more wholesome,” Ms. Gupte said. “I wish there were more of these kinds of carts around the park.”

But wait. What about that classic pushcart up the way, capped with the red-and-yellow umbrella? “I’d choose this over that, even though this is more expensive,” she said.

If you’ve passed through the city in the past century or so, you might expect that pushcart to be serving what everyone (even a drooling aficionado) likes to call a “dirty-water dog,” a hot frank plucked with tongs from a metal vat full of warm, salty liquid.

The delivery system is simple. The cooking method is rudimentary. And the result, with the way that soft bun sops up spare droplets of broth, is so essential to the New York gestalt that visiting world leaders must take a ceremonial bite for the cameras when strolling our sidewalks.

Water-heated wieners can be found on countless blocks of the city, and plenty of people are still ordering and devouring them. The other day, Gerri Queren, an airline employee from Queens, was picking up one with sauerkraut and mustard near the southeastern corner of Central Park.

“This is like a staple of New York,” she said. “It’s a little soggier, but it’s the way New York is.”

But the way New York is has been changing. Parents who insist on wholesome, natural franks in Central Park are one of many challenges quietly, slowly chipping away at the street-corner dominance of the dirty-water dog.

Upgraded versions have turned up at sit-down restaurants like Bark Hot Dogs in Park Slope, Brooklyn, and Crif Dogs in the East Village, in Manhattan, and in Williamsburg, Brooklyn, where some of the franks are served Jersey style, deep-fried and swaddled in bacon. Customers might encounter kimchi, habanero sauce and other unconventional toppings, many with a multicultural bent. Sidewalks where a hot dog swaddled in a paper napkin was once the only available protein source are now crowded with vendors hawking biriyani, dumplings, tacos and lobster rolls.

There’s even a movement afoot to bear down with fussier scrutiny on the carts, whose hygienic standards have often belonged, in the minds of hungry and hurrying New Yorkers, to the “don’t ask, don’t tell” category.

“People want to know that their food is safe and clean and free of bacteria and vermin,” said Daniel R. Garodnick, a city councilman who represents parts of Manhattan, and who has proposed giving food carts the same health-department letter grades given to restaurants.

Mr. Garodnick is 39 and concedes that, like many New Yorkers of his vintage, he is no stranger to the pleasure of a salty impulse buy. “I’ve always enjoyed a dirty-water dog from time to time,” he said. “But I would like to know that it’s hopefully not that dirty.”

None of this means that hot dogs are disappearing from city streets. Boyd Adelman, the president of Sabrett, the company that supplies most of the hot dogs to New York carts, said he was not especially anxious about the threat of haute dogs or other fancy newcomers. Although he would not give any numbers, Mr. Adelman said there had been “no real decline in our sales as a result of new dining options.”

“New people are sampling the alternatives,” he added. “The regulars stand firm.”

What seems to be on the wane, though, is the practice of heating hot dogs in liquid, and one key reason is the evolution of the carts themselves.

“All the carts looked pretty much the same in New York for a long, long time,” said Wayne Sosin, the president of Worksman 800-BUY-CART, which manufactures many of the stainless-steel carts on the city’s streets. The carts might have had a hinged bin for the dirty water, a shelf for squeeze bottles of mustard and an anchor for the umbrella. That was about it.

Gradually, vendors began to catch their own street-corner strain of expansion fever, and strangely enough, it had something to do with permits. With what is known as a nonprocessing permit, they could sell only premade treats like dirty-water dogs, ice cream or pretzels. But if they had a processing permit, they could cook food: kebabs, falafel, fried eggs, you name it. As more vendors came to understand, that variety magnified their potential income.

“As a pure business decision, people want to upgrade what they have because they can gross more,” Mr. Sosin said. Larger, more elaborate carts are on the rise on the streets, he explained, while “just the simple, generic hot dog cart is less and less popular.”

Of course, once a street vendor has a grill or a griddle and a license to use it, it is only a matter of time before hot dogs are rolled on it, giving them a nice coat of char.

Skin-crisping methods are hardly unfamiliar to New Yorkers. Griddled versions, with that perfect between-teeth snap, can be found at landmarks like Katz’s and Papaya King. Traditionally, carts were supposed to stick to water.

Lately, though, they have been upping their game. Memmed Chaaibi, who oversees the gastronomy at a cart parked on the corner of Third Avenue and 86th Street, on the Upper East Side, has the little metal vat where the water is supposed to go, but said he doesn’t use it anymore. Instead, Mr. Chaaibi prepares his dogs the same way he cooks his shish kebabs: on the griddle.

Mr. Chaaibi described the two-dollar Catch-22 when it comes to dirty water: The health department mandates that hot dogs must be kept floating in 140-degree liquid, but when a hot dog stays submerged for too long, its flavor and texture can start to erode.

At the Fahima Halal cart near the corner of 45th Street and Avenue of the Americas, in Midtown Manhattan, Mohammed M. Rahman nearly winced when asked whether he cooked his hot dogs in water. “I do the grill,” he said with pride. “My hot dog and other people’s hot dogs are 100 percent different. My hot dog is halal. And when I cook my hot dogs, I use butter. They’re more tasty.”

This is not to say that a griddled-hot-dog entrepreneur cannot make a few extra dollars pushing boiled dogs.

“I have both; I have a grill, and I have the water,” said Saleh Gobran, a seller at the corner of Broadway and 43rd Street. “Customer wants it grilled, I grill it for him. The customer every time is right.” And if that customer prefers the water-heated variety, Mr. Gobran has a surprise in store, a technique that might be seen in a three-star French kitchen.

“Look,” he said, popping open the water vat and lacing it with a few pro-bono dashes of Trappey’s Louisiana Hot Sauce. “To avoid the lost flavor, I put in some lemon slices and hot sauce. Makes it tasty.”

Bruce Kraig, the author of “Hot Dog: A Global History,” surmised that wooden pushcarts might have switched to water instead of an open flame toward the end of the 19th century and in the early years of the 20th century, possibly to avoid going up in smoke.

“They had fires all the time,” Mr. Kraig said. “They went to hot water because it’s safer, and then people came to like that.” Stainless-steel carts rarely burn down, of course, and now, over time, dirty-water dogs could “decline because of the rise of griddling,” Mr. Kraig said.

If so, there are eaters, and cooks, who would miss them. “If they started disappearing, I would be annoyed, because I like a boiled-water dog,” said Eddie Huang, the New York chef behind Baohaus. “Certain things you just like cheap.”

So does Brian Shebairo, even though he’s a competitor. “I love them, I do,” said Mr. Shebairo, an owner of Crif Dogs. “As much as they probably are filthy and disgusting, I ate one two weeks ago. I came out of a concert a few months ago and probably ate three.”

Change is a metropolitan constant, but the prospect of a citywide low tide for dirty water seems, to some, like a threat to the very identity of New York. “I’m a Brooklyn kid,” said Curtis Sliwa, the activist and radio host. “I grew up on dirty-water hot dogs. Now people look at you like, ‘Oh, my God, what are you putting into your body?’ ”

Mr. Sliwa doesn’t pull any rhetorical punches about what he sees as the rise of “trendoid, new-jack hot dogs.”

“This really is the class warfare of New York,” he said. “Beer. Hot dogs. What’s next? It seems like every arena that used to be traditional, blue-collar, working class, now it’s like: ‘Oh no, we’ve got to have our own. God forbid we eat what common folks eat! And we have to pay a premium price to prove to you it’s the best.’ ”

Any change in the demographic of dogs will probably lead to the most New York concept of all: tense coexistence.

“I just consider those gourmet hot dogs a different experience,” said Alexandra Guarnaschelli, the chef at Butter and the Darby, who says that she, too, grew up on dirty-water dogs.

“Just because a Porsche and a Honda are both cars doesn’t mean they offer the same things,” Ms. Guarnaschelli said. “If we gather all the hot dogs around a campfire, metaphorically speaking, and strum a little ‘Kumbaya’ on the guitar, we can achieve world peace among all hot dogs. I do think it’s possible.”