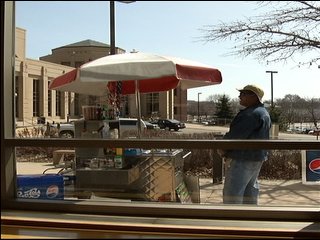 ROCHESTER, Minn. (KTTC) — The fee for a vendor’s license is increasing from $150 a year to $300. That’s down from the first proposed increase that would have cost vendors a whopping $850 a year.

This summer six carts will be allowed to operate in downtown Rochester but last year only four took advantage of the opportunity. Rochester City Council members have defined downtown as the area between Civic Center Drive on the north, 6th Street on the south, 1st Avenue on the west and the Zumbro River on the east.

As for Peace Plaza in downtown only three vendors are allowed. That’s to prevent all six carts from setting up adjacent to each other. All this after restaurants in the city say vending carts offering items like hotdogs are unfair competition.

But the vending cart limit doesn’t just apply to those selling food. Other items permitted for sale are fresh cut flowers, balloons, and news publications. Council members say the licenses will be given on a first come, first serve basis.