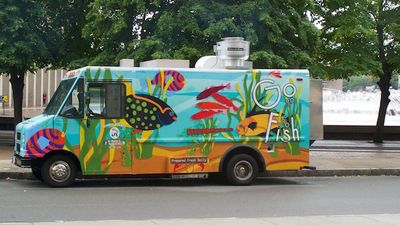 But Montgomery County regulations bar food truck vendors from selling near schools unless they have permission from the principal for a special event. So Barkley and other hungry Wheaton students who were enrolled in an “innovation” class that allowed them to partner with county government decided to try to change the rules.

They came up with a bill that would expand food trucks’ hours of operation to 5 a.m. to 10 p.m. While their proposal doesn’t fix Barkley’s lunch conundrum, it does make it “more attractive for food trucks to start up,” he said, and may pave the way for more changes.

The bill, introduced in the Montgomery County Council on June 16, would bring food-truck operating hours closer to those in the District, which allows food-truck vending from 5 a.m. to 10 p.m. Sunday through Thursday and from 5 a.m. to 1 a.m. on Fridays and Saturdays.

In Montgomery County, food-truck vendors are restricted to operating from 9 a.m. to dusk, which in winter can eliminate the entire dinner shift. A 2013 county report on improving nightlife suggested extending the operating hours, but no action was taken.

“The old dawn-to-dusk rule is an old, outdated rule that no longer applies to our vibrant businesses,” said Che Ruddell-Tabisola, executive director of the DMV Food Trucks Association.

Missy Carr, who owns the Go Fish truck, said the industry has boomed since she opened up shop four years ago.

Carr runs a Web site called MoCo Food Trucks that lists which trucks operate in the county. She says about a dozen trucks are active each day. Extending hours of operation, she said, is “the first (regulation change) that actually seemed really doable.”

The bill is the latest in a series of actions in the Washington suburbs that could loosen regulations on food trucks, which increasingly have become symbols of trendiness and lively street life.

Although proposals to expand food truck operations often spur opposition from traditional restaurants, students and sponsors say they have not heard criticism of the proposal.

But none of those changes was hatched in a high-school classroom.

Nadir Sharif, a 17-year-old rising senior at Wheaton, said food at the school is “repetitive and bland.”

“We all wanted to go and eat at food trucks,” he said.

Last fall, Sharif, Barkley and their classmates identified a handful of issues that they believed were hampering the growth potential of food trucks, including operating hours, zoning and permitting.

They chose to tackle the times trucks could serve food, Barkley said, because it was “the most attainable goal.”

Students prepared a presentation for County Council members, including Hans Riemer (D-At Large) and Nancy Navarro (D-Mid-County), who agreed to co-sponsor the bill.

“It’s not very often we get students who are willing to say, ‘Here is something we want to see changed,’?” Riemer said.

Next up is a public hearing on July 14, after which the bill will likely be sent to a committee for more consideration, said council attorney Josh Hamlin.

The food truck bill will be used to test a new online commenting system that county officials say is designed to supplement traditional public hearings.

The text of the bill will be posted on the county’s Web site, and citizens will be able to submit questions and comments.

Instead of “coming to Rockville on Tuesday at 7:30 p.m. and taking three hours out of your night to share a four-minute prepared testimony, this is a lot more accessible to the average person,” Riemer said.