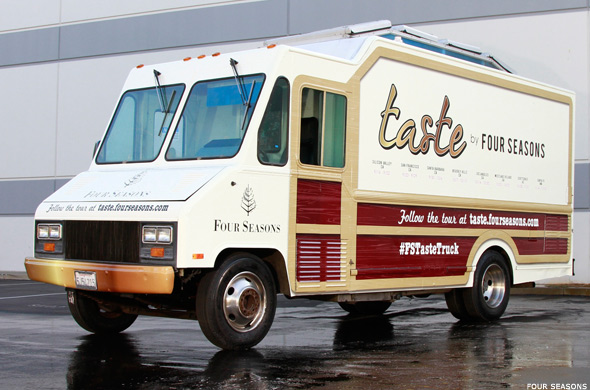 SAN DIEGO (TheStreet) — The setting couldn’t have been more picturesque.

It was Butterfly Beach, in majestic Santa Barbara.

The venue: a food truck.

This isn’t just any food truck. It’s a food truck housing chefs from the Four Seasons, a hotel chain known around the world for Michelin-star dining.

The Four Seasons is trailblazing again when it comes to a luxury hotel chain finding new and different ways to reach out and showcase all it has to offer. In mid-September the Four Seasons launched the FS Taste Food Truck as a way to take its high-end cuisine to a broader audience.

The truck is on a three-state, eight-city West Coast tour that will cover 1,000 miles, ending Nov. 10.

Eight Four Seasons hotels are playing host to the truck, each for one week. The tour began in Palo Alto, Calif., and will wind through Los Angeles, Beverly Hills and Westlake Village over the next few weeks before moving on to Scottsdale, Ariz., and Santa Fe, N.M.

“It’s a great way to reach out to the community and it’s a way to make our food more accessible,” says Alessandro Cartumini, executive chef for the Four Seasons resort The Biltmore Santa Barbara. “And it’s fun for all the chefs, for everyone to show off a little bit and see what we can do in 30 square feet.”