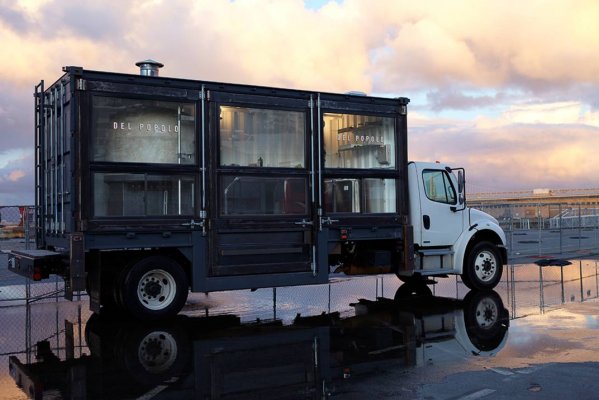 SAN FRANCISCO — On a chilly morning in November, in a hangarlike building at the Hanford, Calif., headquarters of McLellan Equipment — a manufacturer of specialized truck bodies for the construction industry — a team of burly men in coveralls prepared to perform a complex and delicate operation.

Their objective: Load a 4,800-pound Neapolitan pizza oven into an ocean shipping container mounted to a Freightliner truck resembling a slightly downsized semitrailer.

The mood was intense, the atmosphere a blend of testosterone, collective anxiety and the peculiarly sweet exhaust fumes of a propane-powered telescoping forklift ordered for the occasion.

The forklift eased its arms under the lip of the oven’s steel pedestal and three men secured the oven to the lift with a tie-down strap. With the pull of a lever, the operator hoisted the 2 1⁄2-ton oven skyward.

As the lift crept toward its target, Greg Vernon, a mustachioed man in a camouflage cap, issued semaphore-style signals to the operator, who adjusted the lift’s height and angle of approach. With the oven suspended inches away, Vernon leapt into the shipping container for a final measurement. Satisfied that the colossus would clear the threshold, he signaled the driver forward.

From the sidelines, Jonathan Darsky, a 36-year-old pizzaiolo, documented the proceedings on a camera phone.

Moving from law to pizza

Twenty months earlier, when Darsky decided to take his pizza to the streets in a food truck, he had no inkling that the seemingly modest plan would swell to such tremendous proportions.

“It seemed like a good way to save money,” he remarked dryly, adding: “This has not proved to be the case. This thing blew up.”

The same could be said for his culinary career, which began, seemingly on impulse, in 2008.

“I needed a job,” he said over drinks last fall in the Mission District here. “I had just failed the California bar exam because I didn’t really study. I decided at the end of law school that I didn’t want to be a lawyer. I’d always liked pizza and had heard about Pizzaiolo,” a Neapolitan-style pizzeria in nearby Oakland.

He continued: “On a whim, my wife and I went to Yom Kippur services in Oakland, and afterwards, like good Jews, we went for pizza. I said, ‘Hey, do you need someone to make dough?’ ”

Darsky spent seven months at Pizzaiolo, developing a fascination with dough-making. In his free time, he said, “I read every book on the subject.” Especially influential was a section of Harold McGee’s tome “On Food and Cooking” that explains gluten formation.

From Oakland, he migrated to Pizzeria Delfina in San Francisco, and when the Mission District Italian restaurant Flour+Water opened in 2009, its chef, Thomas McNaughton, hired Darsky as its pizzaiolo, or pizza chef.

The position gave him autonomy and visibility, and his reputation grew. His pizzas drew the praise of local and national food critics and helped propel the restaurant into the finals of the James Beard Awards.

In January 2010, Darsky left Flour+Water, intending to open his own pizzeria, but he couldn’t find a suitable property in San Francisco. That March, while in Austin, Texas, with his wife, Darsky witnessed the city’s flourishing food-truck scene, and at his wife’s suggestion decided to pursue a mobile solution. One stipulation, though, would heavily influence the vehicle’s design.

Quest for the right oven

“I was narrowly focused on wood-fired pizza,” Darsky said, “and I wanted to cook at a high temperature.” After a research trip to Italy, he selected an oven built by Stefano Ferrara Forni of Naples.

Immense and immensely heavy, the oven, made of bricks and mortar, was also quite fragile. The conveyance, therefore, would need to be large, rigid and capable of insulating the oven from vibration while on the road. Darsky went looking for a company that, in his words, “had the ability to cut metal and had some experience with trucks.” An Internet search led him to McLellan.

“It was a very quick conversation,” DeBattista recalled. “It’s something we had never done before, but we’ve also done several off-the-wall projects,” mentioning a telecommunications trailer for the Kuwaiti government and antenna trucks for a Saudi prince. “I told him we could do a lot of the mechanical fabrication.”

Initially, they discussed the possibility of modifying a step van — the sort of vehicle that serves as the platform for most food trucks — but quickly determined that a truck with a higher weight rating would be more suitable. DeBattista also made an instrumental suggestion.

“We talked with DeBattista,” Darsky recalled, “and he said, ‘You ought to think about a shipping container.’ We thought about it, and it made sense. It was the right size, and it was designed to be on the highway.”

In short order, Darsky bought a used shipping container from a broker in Long Beach, Calif., and a well-maintained Freightliner M2 106 with 303,000 miles on the odometer from a Texas dealership.

As the components headed toward Hanford, Darsky worked with a San Francisco designer to develop a blueprint for modifying the shipping container. A Madera, Calif., design and engineering firm devised a base for the oven and a means of attaching the container to the truck.

The design phase proceeded slowly, with its share of setbacks. An early, flawed plan to mount the oven directly to the truck’s rails was scrapped in favor of welding the oven to the floor of the container. Darsky attributed the delays to poor oversight on his part.

The final renderings, delivered to McLellan in September, revealed striking modifications to the container. An entire side wall was sliced away, replaced with steel and glass doors that would provide an unobstructed view of the kitchen; a deep stairwell would allow servers to stand at eye level with customers, rather than looming above them as is typical for a food truck. Most critical, perhaps, four Goodyear air springs — positioned beneath the corners of the container, and inflated by the truck’s pneumatic system — would protect the oven from vibration on the road.

The fabrication took only a few weeks. Greg Vernon, an expert welder and millwright, performed the bulk of the work. After McLellan tested the vehicle for roadworthiness, Darsky drove it to a series of appointments with electricians and plumbers, who outfitted the kitchen in compliance with state and city health codes, and to a paint shop, for an exterior coat in a reserved shade of gray.

On a brisk Friday afternoon in early May, Darsky piloted the truck to a parking spot in the Mission District for an unpublicized test run — what is known in the restaurant industry as a “soft opening.” Soft, however, doesn’t quite convey the effect of a 14-ton steel and glass colossus, smoke pluming from its chimney, its bellowing 250-horsepower diesel engine leaving a wail of car alarms in its wake.

As Darsky dressed a margherita pizza in the kitchen of his road-going establishment, named Del Popolo— Italian for “of the people” — he seemed a man in his element, his hands working with speed and quiet fluency. He slipped the pizza from the peel, watched it evolve in the oven’s blistering heat, and swiftly lifted it upward into the dome for a final searing blast.

Sixty seconds after entering the oven, the pizza emerged, its delicate crust pillowed and scorched, encircling a small sea of molten mozzarella, tomato and basil — a few simple elements skillfully transformed into something greater and more wondrous than the sum of its parts.