By Paolo Lucchessi  |  Inside Scoop SF

For years, the Chairman truck has drawn long lines at its various appearances throughout the Bay Area; by next week, bao-lovers will not have to chase the truck around town, because the Chairman’s brick-and-mortar restaurant has finally arrived. 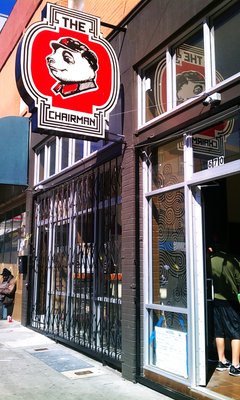 For the most part, the Chairman restaurant, located on the Tenderloin stretch of Larkin Street, will be a permanent version of the same formula that has won over food truck audiences..

However, the restaurant will expand on the trucks’ popular, if limited,bao-centric menus. Several new proteins will join existing hits like the spicy chicken with pickled carrots and cucumber, or the pork belly with daikon and shiso. New to the bao lineup will be a Japanese curry beef one with fennel slaw and horseradish mayo, and a vegan option, made with tempeh.

Beyond baos, the big news is that the Chairman restaurant will now offer rice bowls, adding a gluten-free option to go along with the baked or steam bun options. Other new dishes include a noodle salad, made with noodles from sweet potato starch, almost like a version of Korean chapcha noodles; chicken wings with a yuzu koshu glaze; and French fries topped with the same togarashi and seaweed seasoning that grace the truck’s wonton chips.

On the drinks sides, the Chairman folks will be unveiling a line of housemade fruit-based sodas, like charred cinnamon and black currant, apricot and sweet ginger, and pink guava, passion fruit and toasted coriander.

The space itself is small, with only 15 counter seats. Like the trucks, the restaurant will take on a quick service model, with guests ordering at the counter and picking up their order.

“We’re sticking to our fast food, quick-and-delicious model,” says Chairman operator Curtis Lam. “We’d like to round off our trucks with a few more restaurants. I think the restaurants give us a creative canvas.”

The Chairman restaurant is currently slated to open to the public on Monday, April 13. Hours will be 11 a.m. to 9 p.m.