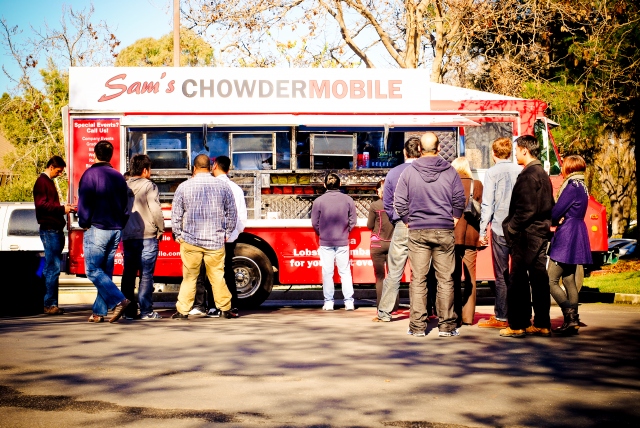 In an effort to bring more exposure to Saratoga Gateway businesses, business owners will host a monthly food truck event called “Foodie Fun on the Run.” Although the name implies people will be on the move, the owners said they’re hoping potential customers will stop and shop.

“Many times I have been told by prospective new clients that they have driven by our building thousands of times and never even realized we were here. Once they discovered us, they were thrilled to learn we exist so close by,” said 4EverFit owner Brenda Kashuba.

The food truck event will take place every fourth Saturday of the month with the first one to be held on May 26, 4-8 p.m., in the parking lot of Alameda Family Funeral and Cremation, 12341 Saratoga-Sunnyvale Road. Subsequent events will be June 23, July 28, Aug. 25 and Sept. 22.

Moveable Feast will bring in a host of food trucks, including Sam’s Chowder Mobile, House of Siam, Curry Up Now and Treatbot (which offers karaoke and ice cream). Local band Sound Eclipse will also perform at the May 26 event.

The possibility of a food truck event has been in the planning stages for some time. But a few Gateway business owners and employees finally came together to hash out the details and get it done. They included Zoe Alameda, Heather Durham and Jessica Burroughs of Alameda Family Funeral and Cremation, Deni Green of Azule Salon and Kashuba.

“This area has many businesses that do not get the exposure like the Saratoga Village,” Alameda said. “The focus is always about the ‘success’ of the Village businesses, but Saratoga forgets that there are many other shopping districts with businesses struggling to grow and stay profitable.

“We lost Blaine’s Lighting, an old Saratoga established business, to bankruptcy. I do not want to see any further businesses fail in this shopping district.”

The businesses in the area have worked hard to make a name for themselves and want to stick around, Green said.

“We, as business owners, are always thinking of ways to improve the environment we work and help the community see the value of a small business to them and their families. Most of us have been in business for over 30 years, and we’d like to see another 30 years in this community,” she said.

The idea of using food trucks to attract customers came from Green, who had invited some to the Saratoga Chamber of Commerce grand opening at her business last October when she opened her new location. The trucks attracted more foot traffic and led to more walk-ins for the business, Green said.

That gave Alameda the idea to host a monthly event to help all the businesses in the area. Kashuba, who said she was uneasy about the idea at first, eventually jumped on board and said that a part of the profits should go to charities and nonprofits. Mayor Chuck Page, who attended one of the event meetings, added that the beneficiary of the donation should be local.

The first nonprofit group to benefit will be the Relay for Life of Saratoga, an event that raises money for the American Cancer Society. Beneficiaries for future events could include local schools and the Saratoga-Monte Sereno Community Foundation.

“I have always tried my best as a business owner to give back whenever possible,” Kashuba said. “I do these things because it is a way of giving back and because it links 4EverFit to the community in a more important way than just to be profitable.”

Green said giving to a charity is a win-win for the businesses and the community.

“If we show the community that we care about what’s happening in the area where they live, then they will in turn support us by shopping in town and not driving somewhere else,” she said.