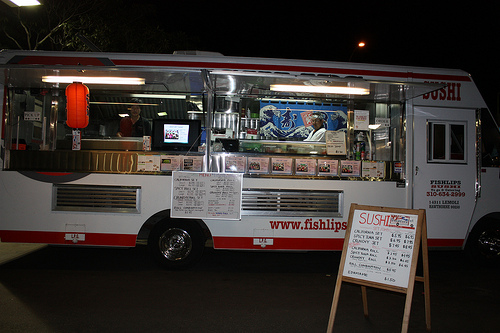 It seems that tailored food safety regulations are closely following behind what has become a nationwide phenomenon: food trucks. Santa Monica is the latest municipality to adopt health standards specific to the trendy food establishments-on-wheels.

The Santa Monica City Council Thursday adopted changes to the county’s health and food safety code, requiring local public health officials to increase inspections of mobile food vendors from once annually to twice. According the Santa Monica Daily Press, food trucks will be assigned letter grades after each inspection. “Any mobile food vendor who receives below a C will be forced to close,” writes Kevin Herrera.

Los Angeles County has approximately 6,000 mobile food vendors. The county’s public health officials foot the bill on inspections within Santa Monica, the new rules simply incorporate the county’s practices into Santa Monica’s municipal code, which hadn’t been updated since 1998, according to the Daily Press.

“We’ve always inspected all food facilities, including mobile food facilities,” Terrance Powell, director of the public health department’s Bureau of Specialized Surveillance & Enforcement Environmental Health Division told the paper. “This ordinance is to simply disclose to the public in an organized way information to help them make objective choices as a consumer.”

As the New York Times put it in October, the move to include food trucks under the same, or similar, rules as restaurants “may be the ultimate sign that this faddiest of food fads is going mainstream.”