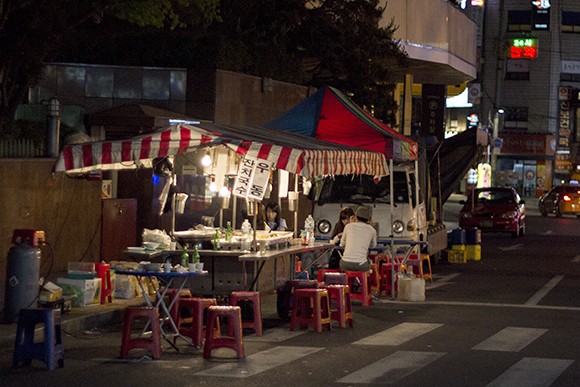 Any trip to Korea is absolutely incomplete without dipping under a steamy street-side tent to eat some mystery food, preferably late at night. Street food is extremely popular in Korea. Not in the same way as Twitter-enabled, grilled-cheese food-trucks that are growing with momentum in the U.S., but instead in a much more homey, down-to-earth way. Some foods have their gimmicks, but most of it is classic Korean food.

Carts like the one seen above are a staple of everyday Korean life. I see close to a dozen on my 20-minute walk to work. Called pojangmacha, appropriately meaning “covered wagon,” they are large steel carts with a striped vinyl tarp draped over top, forming a tent, which to me really evokes a carnival feel. There are thousands across Seoul, most of which seem to be manned by a surly middle-aged woman. Some are standing room only, others have seating at plastic tables, many have some beer or soju available to go along with your snack. Some carts serve a variety of foods, but most often carts will specialize in a specific dish such as some of the following: 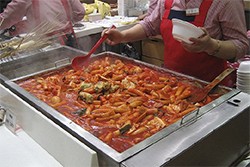 Teokbokki
Pronounced closer to tuh-po-key, it is easily the most popular street food in Seoul, with the majority of food carts serving it alongside various fried foods of dubious origin. It’s a serving of rice cakes (tteok) and processed sea food (called odeng) in a spicy red sauce. While it does look a bit unappetizing and messy, the soft, gooey texture of the rice cakes goes along great with the spicy sauce.

Kimbap
Think of it as the little brother of sushi rolls, the difference being that Kimbap features less seafood and more vegetables. Often sold from a small table near a subway station or bus stop in the mornings, they make a great, cheap, filling breakfast or lunch.

Grilled squid
Usually extremely cheap, around 1,000 Korean Won (~$0.88), this is possibly the simplest of all Korean street food. The squid is flattened and grilled, then served up with some soy sauce and mayonnaise. Enjoy it sitting down with some friends drinking some beer on the side of the road.

Hotteok
My personal favorite, it’s basically a pancake with a sweet cinnamon, sugary filling. Unfortunately, hotteok is typically only available seasonally during the colder months; it’s the only reason to look forward to Koreas ridiculously freezing winters. 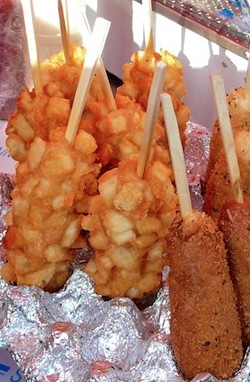 Huge ice cream cones
Even though it’s currently ridiculously cold in the wintertime, I still see people walking around with ice cream cones. Interestingly, almost all ice cream cones sold on the streets of Seoul are comically tall, a good two feet tall.

Turkish kebabs
Shwarma, doner kebab, gyro … many names, one thing: lamb, veggies and a mayo-like sauce wrapped in a pita. Popular all over the world, they are starting to take hold in Korea. They are becoming increasingly popular, especially as late night food in party areas popular with expats, such as Hongdae and Itaewon.

Tornado potatoes
They take a whole potato, turn it into one giant spiral, then fry it. Yeah, it’s basically just one big French fry, but that’s exactly what makes these things so fun.

Corndogs
American county fair food with a little twist, crazy French fries all over it. Look at it! I almost want to eat a stick of just nuggety French fries by themselves.

With temperatures dropping to well below freezing right now in Korea, it’s a bit hard to believe that there are still people willing to eat street food but surprisingly, there are plenty of people everyday willing to stay out in the cold a little longer in order to get their snack on. So when you come to Korea, make note of these foods and track them down – it won’t be too difficult.

Seoul, PRK: Food trucks – Where are they at?