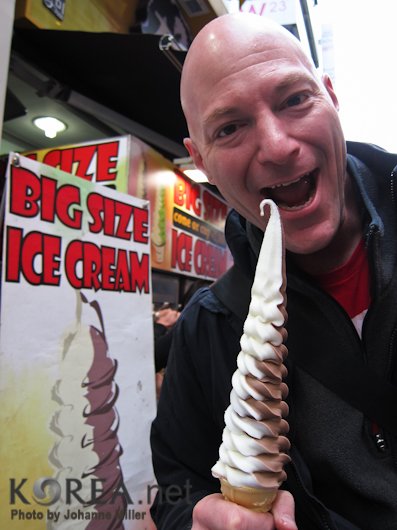 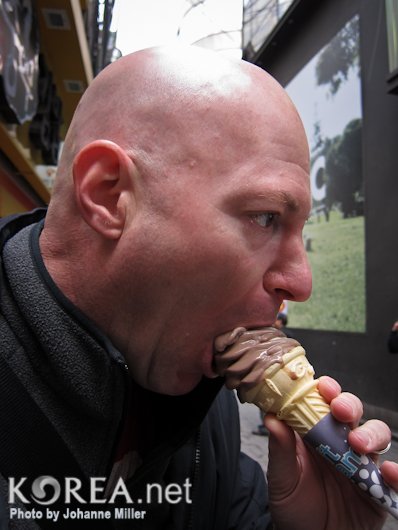 This month Featured Writer Steve Miller has been cruising the streets of Seoul, looking for some of the best Street Food to share with readers. This month he’s introduced topokki, bindaetteok, and theTornado Potato. As his series concludes, Steve changes things up a little to take a look at something many Koreans enjoy on a hot summer day while strolling through the streets: ice cream.

Now it should be pointed out that ice cream is not literally considered a Korean Street Food; however, some of the best presentation of this frozen treat does appear on Korean streets. Most notably on the streets of Myeongdong where many head to enjoy the area’s shopping.

Research conducted by the BBC, indicates that ice cream may have first appeared in China around 200 BCE. Another report claims Emperor Nero of Rome (37–68 CE) had ice brought from the mountains and combined it with fruit toppings. This latter treat is very similar to Korean patbingsoo. However, ice cream as we know it today appears to have originated in France somewhere in the 17th and 18th Century with the first ice cream machine being patented in the 19th Century. Regardless of when, where, or how it was created, billions around the world agree – it’s fantastic.

In Korea, ice cream served up in cones on the street is fairly common. However, it is rare to see cones poured as large as this:

Getting a cone this size is a special treat – and one that is surprisingly affordable – only W2000. Most venders serving up this style of soft serve cone offer only chocolate and vanilla. However, on this visit to Myeongdong, I was able to find a vendor that served up four different varieties: vanilla, choco-vanilla, choco-green tea, and choco-strawberry. The choco-vanilla was the most popular combination with choco-strawberry coming in second.

Probably the most amazing thing about this treat is the ability to get the ice cream standing that tall. In the video, you can witness the time it takes for the ice cream to be carefully distributed in the base and then stacked up high. Having tried to do this numerous times at various buffets, I have yet to be successful. That being said, I have been successful in making ice cream at home. One of the more interesting and easy recipes follows:

First, in large bowl whisk the egg yolks, sugar, vanilla, and salt until pale yellow and mixture falls off it in thick ribbons. This will take you about 5 minutes if using a mixer or a little longer if doing it by hand. Once completed, set it aside. Stirring constantly, heat the evaporated milk in medium saucepan until it simmers. Slowly add the hot condensed milk to the egg mixture, whisking constantly, until fully incorporated. Transfer this mixture back into the saucepan and heat. Whisk constantly until it appears thick. Do not overheat or eggs will scramble. Remove from heat and chill mixture completely.

Whip 1 cup of heavy cream with whisk or mixer until double in volume. Add whipped cream to egg mixture and fold with whisk until no lumps remain. Pour the mixture into ice cube trays and freeze for 4 hours or until solid. Yes, that’s right: ice cube trays.

Combine frozen cubes of ice cream (use a spoon or a dull knife to remove them from the trays) and remaining heavy cream. This can be done in a blow, but more easily accomplished with a food processor. Combine until smooth and then transfer the creamy mixture to a container and freeze for at least 4 more hours before serving.

This recipe is quick and easy. While it does state it’s for vanilla, it can be tweaked a little but to incorporate other flavors. Speaking of which, what’s your favorite ice cream flavor? Those in Korea, where’s your favorite spot to grab some ice cream?

Steve Miller is Korea’s best-known travel video blogger. His videos have been viewed over 3 million times and seen on major international media outlets in Korea, France, the Philippines, Thailand, and CNNGo. In addition to sharing his entertaining and informative videos, he writes for various Korean Tourism publications and shares travel advice on Korea’s domestic and international radio outlets.

Seoul, PRK: Food trucks – Where are they at?