When you think of food trucks you might picture those questionable stalls selling hot dogs and giant pretzels on street corners in New York City.

Though we’re not talking about fast, cheap and unpalatable here. We’re talking gourmet, chef-backed mobile food vendors who set up shop at various locations and often have a cult following.

When the food truck movement first made it way to Australia many people assumed they would be a passing craze, but in recent years these mobile restaurants have proven to be bonafide options when choosing gourmet food to eat.

Smokin’ Grill Barbecue is one such western Sydney-based truck with a large and loyal following on social media. They decided to try a truck as opposed to a bricks-and-mortar restaurant as no one else was doing traditional American-style barbecue on wheels.

“Obviously the initial cost and risk involved in starting a food truck is less than that of a restaurant, plus you don’t have to lock yourself into any short to long term leases,” Anthony Barbera, Managing Director of Red Ember Catering and Events who run Smokin’ Grill Barbecue told The Huffington Post Australia.

“Location is the key to most food businesses and the food trucks allow its owner to move around and test new ground on a daily, weekly and monthly basis, while at the same time building their brand in more than one location. The ability to move around means we are not limited to our restaurants, but can cater for large scale events and small corporate functions as well as our day to day activities.” 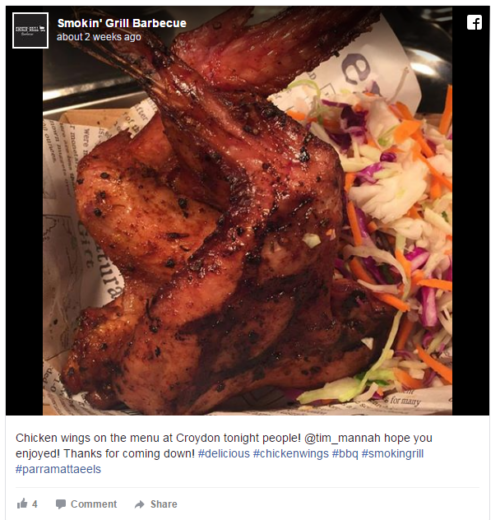 On the topic of how they decide where to park for the evening, it’s largely consumer driven.

“We try to rotate our preferred locations on a three to four week basis, while trying out new locations and doing events in between. Often we will pair up with other food trucks or simply pose the question via social media, “Where do you want to see us next?” Barbera said.

It’s a bandwagon that even the councils are jumping on. The City of Sydneyoperates a fleet of 21 food trucks serving everything from New York-style pastrami sandwiches and organic pizzas to Asian cuisine and Belgian waffles around the city. And don’t worry — the food standards are really high.

“Operators use an approved commercial kitchen to prepare and cook food in advance before dishes are finalised and served on site,” a spokesperson for City of Sydney told HuffPost Australia.

“Each truck serves an average of more than 1,700 customers a month in different locations across Sydney, with peak trading hours between 9pm and midnight.”

“Trucks change sites regularly and are permitted to trade both in City-owned streets, and in 10 designated off-street trading locations including high demand sites such as Customs House, Pitt Street Mall and Hyde Park.”

It doesn’t look like the popularity of food trucks will be slowing down any time soon.

“Food trucks are ever growing in popularity. The quality and variety of food now being produced and served from food trucks is rivaling that of popular restaurants. The mobility of the food trucks is not only a benefit for us the owners, but also the customers who are getting different styles of food pull up to their doorsteps each and every week,” Barbera said.

The following websites can provide information on food trucks available in capital cities including when and where they appear.

Sydney — Truck On The Move

Melbourne — Where The Truck At