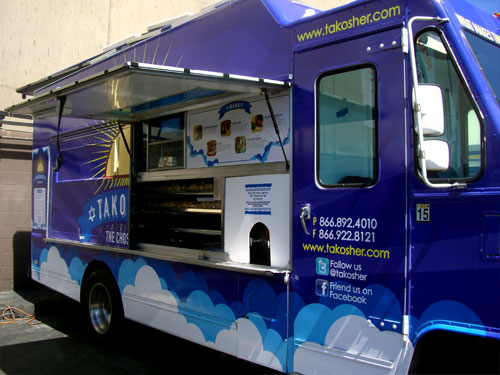 The People of the Book (finally) become the People of the Truck when Takosher (Twitter: @takosher), the nation’s first kosher taco truck soft-launches on Monday, serving tacos with brisket, latkes, and more traditional fillings.

T.G.I.N.F. because the Takosher Truck, like the John Goodman character in “The Big Lebowski,” doesn’t roll on shabbos. It does, however, serve lunch on Fridays and re-opens late on Saturday nights to sate the club-hopping buccaneers of Pico-Robertson.

“I know for a fact that 90% of the kosher community has never had an authentic taco,” says Takosher co-founder Lowell Bernstein.

The Takosher Truck is certified Glatt kosher, considered the most stringent level of kosher, by Three Line K, one of many kosher-certification agencies — and the only one willing to work with Takosher.

Just as Kogi, once upon a time, created the template for nouveau food trucks, Takosher’s founders spent a year-and-a-half doggedly working to develop a “kosher program.”

That requires more than just avoiding pork or shellfish and not mixing meat with dairy. It means everything on the truck, from the aluminum foil to the chipotle peppers, must be kosher. Also, all of Takosher’s food, including the brisket, which is slow-cooked for six to eight hours, must be prepared on the truck rather than in a prep kitchen.

The meat comes from Doheny Kosher Meats, one of Los Angeles’ most respected kosher meat purveyors. Even the cleaning products had to be kosher. No mashgiach, someone (usually a rabbi) who supervises the kashrut status of an establishment, will ride on the truck. Instead, Takosher worked with Rabbi I. Yisroel Kelemer and his minions to develop stringent kosher accountability — including surprise inspections.

“We had a real problem with cilantro,” says Takosher co-founder Moises Baqueiro. To ensure that no tiny, un-kosher bugs are accidentally consumed, all leafy greens aren’t merely washed; they’re inspected on a lightbox, similar to what you’d find in a darkroom.

Bernstein, Baqueiro and the truck’s third partner, Chris Martin (not the Coldplay singer), developed a five-taco menu that includes traditional offerings like carne asada and chicken as well as Mexi-Jew fusion tacos. The brisket recipe, which Bernstein says he married into, involves chilli sauce, sauerkraut, raisins and secret spices. The latke tacos are filled with fried, panko-breaded mashed potato balls topped with a cinnamon-laced jalapeno/apple chutney. The vegetarian “fujitas” (to”fu” + fa”jita”) are made with seasoned tofu sautéed with bell peppers and onions.

Price-point is a major challenge. Anyone who’s ever eaten at the Kosher Subway on Pico Blvd. knows that the $5 sub you can get at any of the chain’s other franchises costs $8-9 here. Kosher ingredients cost more, so Takosher’s tacos cost more too: $2.50 – 3.50 apiece.

“Actually, we were worried that if our prices weren’t high enough, kosher customers might not believe our food really is kosher,” Martin says.

Rolling out of the Road Stoves lot, the Takosher Truck will cater to the synagogues and day schools of Jewish enclaves like Pico/Robertson, Hancock Park and Encino, but Bernstein also hopes to broaden the truck’s customer base by appealing to non-kosher eaters. After a couple weeks of getting up to speed, the Takosher truck will officially launch on Sep. 11.

“Our chicken and brisket tacos will stand up to anybody else’s,” Bernstein says, “but nobody else has a latke taco, a brisket taco or a fujita.”