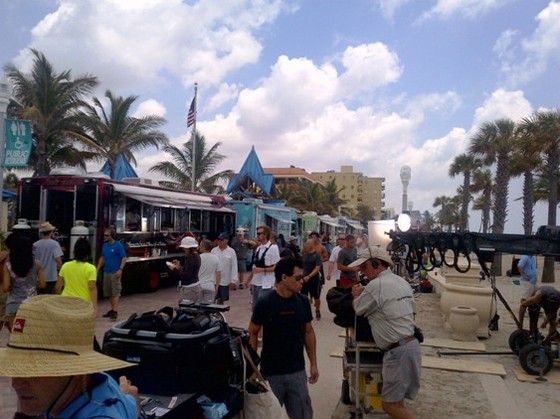 The Glades, the A&E television series that stars Matt Passmore as a Chicago detective sent to frolic in the South Florida sun as punishment, typically films on location using the beautiful beaches and people of Miami and Fort Lauderdale as its backdrop.

Last evening, casting directors at The Glades got creative. Instead of hiring people, they hired food trucks as featured players for one of the show’s scenes. Latin Burger & Taco, Red Koi, Ms. Cheezious, Dim Ssäm á GoGo, Boba Station, and Arepa Box were parked on Hollywood Beach as part of a staged food-truck roundup.

Filming took place well into the night, with some trucks being used for additional footage today and tomorrow. Clean Plate Charlie has exclusive photos taken on the set and will update readers on when the episode will air.

Crew sets up a shot for a scene from The Glades as the sun sets over Hollywood Beach.

Extras decked out in beachwear wait to eat from food trucks.