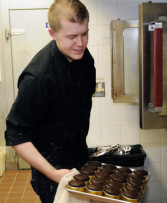 La Cakerie has only been open for just more than a month, but the downtown Towson bakery already has some big changes in store.

“We’re looking to do more of a bakery, cafe vibe,” said Hisley, who noted that fresh baked artisanal breads will remain the core of the business.

“We’re ever-evolving to give our customers what they want,” Hisley said. “We want [La Cakerie] to become a regular Towson spot.”

Additionally, a La Cakerie food truck will hit the streets within the next several months. The truck will feature prepackaged goods.

Hisley, who participated in Taste of Towson and Winterfest, said the feedback so far from customers has been positive.

“I’ve always loved to come to Towson,” he said. “Now its become my life.”

The Cupcake Wars episode featuring Hisley is airing Thursday at 5 p.m. and Friday at 3 p.m.,according to the Food Network website.