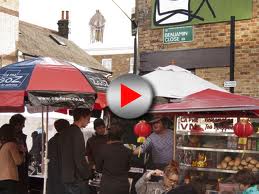 The first British Street Food Awards was all about recognising the best of the 10,000 mobilers who sell their wares on our streets. A panel of the biggest figures in British food compiled a shortlist, and — in a Ludlow car park — they competed in a cook off. It wasn’t white tie. It was white apron, and the beginnings of a revolution in the way we eat.

The 2011 British Street Food Awards will be at Harvest at Jimmy’s, on the weekend of September 9-11. And the prize for the overall winner is the right to trade in the Olympic village — amazing to think how far our street food has come. We are now advising on how to get street food into the 2012 Olympic Games, as well as launching a BSFA market, and writing the inspirational Street Food Revolution (published this summer). Check out the News Blog!