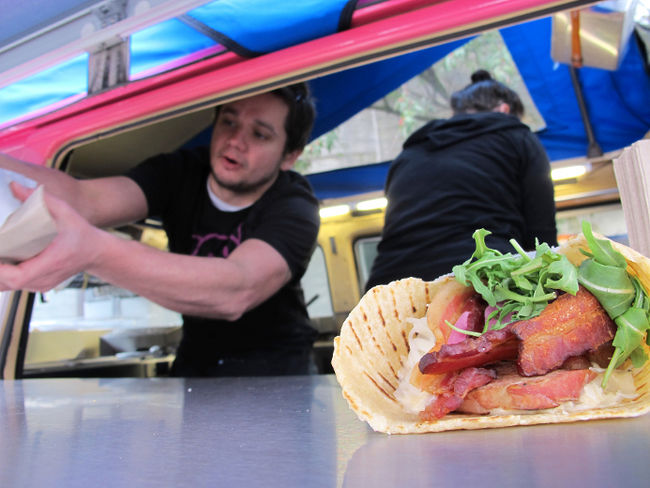 One of the more popular initiatives promoted by Vancouver during the last few years has been to diversify the food you can buy from street vendors. Food trucks with names such as Holy Perogy and Pig on the Street are giving Japadog a run for its money.

Two thumbs up to the New Westminster Downtown Business Improvement Association for taking the food truck concept to the next level. The BIA is proposing a food truck festival this summer along historic Columbia Street. It would include both mouth-watering morsels and street entertainment.

My only beef with the festival is that it doesn’t find a way to incorporate the Front Street parkade and newly constructed Pier Park. If this idea gains traction and the weather cooperates, you can expect it to draw huge crowds.

Delta Mayor Lois Jackson deserves some recognition for hosting a public forum Wednesday night focusing on the pros and cons of a unified regional police force. Currently Delta, New Westminster, West Vancouver and Vancouver all have their own separate cop shops.

Port Moody also has a police department, with the motto “no call is too small.” Given the police board just asked council for a 7.5% budget increase, maybe the motto should read, “no tax hike we don’t like.”

Commissioner Wally Oppal’s missing women’s report recommended implementing a regional police force as a way of helping to prevent future tragedies. That’s why Jackson gets thumbs down for opposing regional policing, despite clear evidence that shows it has merit.

Clay has his say

Last week I wrote about how Port Moody Mayor Mike Clay and his council colleagues were proposing to jack up property taxes by nearly 6%.

Now an anonymous commenter who spoke out during the city’s budget consultation process has Clay all riled up. He challenged the mayor to “man up” and stop blaming former Mayor Joe Trasolini for the city’s financial mess.

In response, Clay posted on Facebook: “Our finance staff and our analysis confirms we are $3 million per year short to fund maintenance and replacement of our major capital assets. That’s (an) over 10% tax increase just to catch up for the short funding that exists today … Past city budgets relied on double-digit population growth (and tax growth) and left us with $0 to fund needed infrastructure such as police stations and fire halls, and forced us to borrow to fund infrastructure. I’m not ‘blaming,’ it’s the facts, and I hope it won’t continue.”

Is Clay blaming Trasolini, or not? You be the judge.