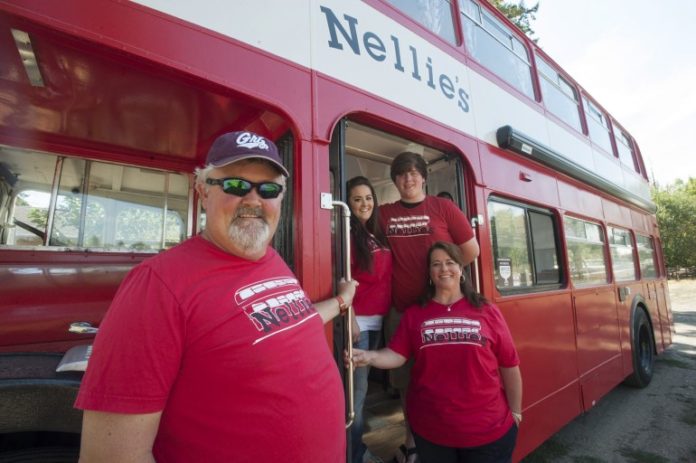 By Viki Eierdam  |  The Columbian 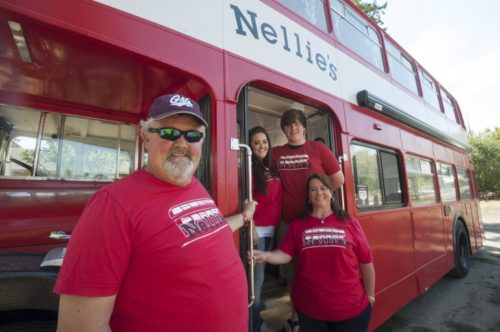 There’s an irony in how a bus— that once caused deep grief and sorrow— can bring hope to a family and a community more than five years later.

On the night of April 24, 2010, five friends were in a crosswalk in Old Town Portland when a TriMet bus making a left-hand turn struck the group, trapping three of them under its wheels. Twenty-two-year old Vancouver resident Danielle Sale was one of two young women who were killed in what company officials dubbed “the worst tragedy in TriMet’s history.”

Fast-forward to May 2015, and a bright red double-decker 1965 Bristol bus drives the streets of Vancouver causing a stir of excitement while delivering some mighty fine barbecue and raising money for families dealing with sudden loss.

Nellie’s Food Cart — a play on one of Danielle’s nicknames — is a legacy of love that memorializes not one but two Sale family members. Owned and operated by David Sale and his family, they share the story of Danielle’s life and honor their niece-turned-daughter, Kristy Cassidy, as well.

Cassidy graduated from Hudson’s Bay High School and was enrolled in the Gateway to Adult Transition Education program that helps prepare developmentally disabled students for independent living. One night in 2004, at the age of 18, Cassidy died in her sleep.

Born out of their own deeply personal heartache, Dani’s Wish was founded by David’s wife, Jeannette, in 2014 to help families in Clark County with funeral expenses after the unexpected loss of a child.

“We help anonymously. That’s what my daughters would’ve wanted. Kristy could not get out of bed without a smile on her face. To teach a family like mine the gift of grace and happiness, no matter what you’ve been through, it’s just a pure blessing,” David said.

It was that smile that had encouraged her older sister, Danielle, to set a goal to become a flight nurse and focus on helping developmentally delayed adults while attending Boise State University.

David shared that his wife recently met a lady while vending at Tidewater Cove Marina who’d lost a child eight years ago and appreciated the Sales’ efforts to impart a small comfort into grieving families through Dani’s Wish. David was vending at a local antique store where some customers bought lunch from Nellie’s and one of them was a teacher of Cassidy’s from Hudson’s Bay. The joy and nostalgia of Nellie’s seemed to give him a sense of closure.

Then there are the connections inspired from an entirely different perspective. It turns out this double-decker makes the world feel a whole lot smaller than it is.

David recently had a woman chase him across Camas. When he stopped the bus, she insisted in a thick British accent to be allowed upstairs. Moments later, walking down the spiral case, she exclaimed that she rode this bus to school every morning in England. David naturally assumed she meant one similar, but she had memorized the license plate — MVX 883 — from when she was a little girl.

The bright red Bristol was acquired by the city of Anchorage, Alaska, along with 20 others, more than 15 years ago for a sightseeing project that was scrapped. David’s brother purchased it to turn into a motor home, but after weighing the costs, ferried it down to David. According to David, everything from the floor down has been replaced, and everything from the floor up has been remodeled.

Jeannette refinished all the original seating upstairs and made the window curtains. Material was sourced from local companies including Rodda Paint’s safety red and lumber from Shur-Way for the built-in bar at the front window.

With seating for up to 16 on the upper level, Nellie’s is also available for wine tours, pub crawls and other special events.

Nellie’s location is easy to track online. The double-decker has made appearances at the Hazel Dell Parade of Bands, Living Hope Church, a Relay for Life event, Westfield Vancouver mall’s farmers market, Battle Ground Harvest Days and is regularly invited by businesses to vend in their parking lot. It’s their intention to stay in Clark County and make their efforts a community one.

“Just to have the bus there with the healing that we endured, it’s a God thing. It’s just so cool. It was meant to be. It was definitely meant to be,” David said.

On the menu, hungry customers will find coffee drinks made with Happy Cup Coffee — roasted by disabled people in the Portland area; baked goods from Clark County bakeries di Tazza and Julia Bakery; and pulled pork sandwiches with a choice of homemade coleslaw or homemade barbecue sauce and pulled turkey sandwiches served with homemade cranberry horseradish sauce atop pretzel rolls accompanied by chips and a drink. Two sliders for $10 and one slider for $6 rounds out the lunch menu.