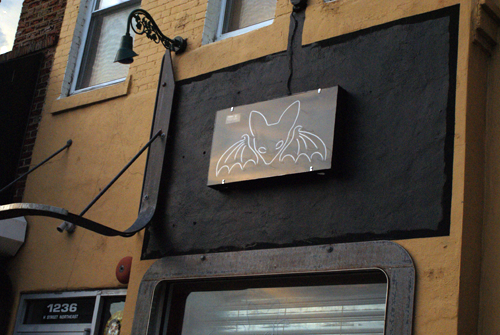 For all the food trucks that have proliferated along D.C. streets, there are still a few that don’t get the chance. Hot People Food, for one, doesn’t operate within the District line for the simple reason that its truck is too big to comply with current city regulations.

Washingtonians will finally get to taste the suburban truck’s signature “bikini beef” and “sassy chicken,” however, during a pop-up event at H Street’s Fruit Bat in April. The cocktail-centric boîte is hosting a series of “Truck Stop” dinners where mobile eats vendors will be taking over its otherwise immobile kitchen, beginning on Friday, Mar. 30.

“It’s a great opportunity for fans of particular trucks to have their favorite street fare in a sit-down restaurant with a beer or cocktail,” proprietor Erik Holzherr tells Y&H.

The pop-up also offers another option for late-night eats along the popular party corridor: the meals will run from 7 p.m. until at least 2 a.m. on Friday and Saturday nights. Or, as late as 5 a.m.—”if the crowd merrits it,” Holzherr says.

The late hours additionally provide food trucks with an opportunity to serve hungry night-crawlers at a time (post-midnight on weekends) when they’re generally prohibited from operating under D.C. regulations.

The pop-up series kicks off with Grids Waffles this coming Friday and Saturday, as well as the following weekend. Hot People Food then moves in for the subsequent three weekends in April.