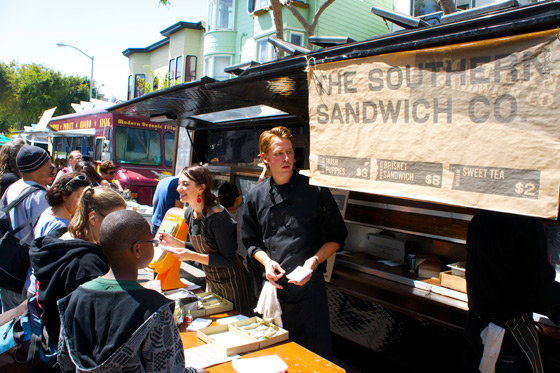 If you were in San Francisco on Saturday, chances are you or someone very close to you was on Folsom Street in the 20s and eating something greasy. This would have been at the third annual San Francisco Street Food Festival, organized by La Cocina, where seventy some odd vendors and restaurants set up their booths/pulled up their trucks and hawked tasty, portable fare. Once again, the fest was filled with people by the end of the first hour, with lines already snaking down the block for local favorites (Nombe, Flour + Water) and visiting vendors (NYC’s Arepa Lady) alike.

And yes, many people were brave enough to try Don Bugito’s wax moth larvae tacos — which were a popular conversation topic — but we’re sorry to say we were on a no-larvae cleanse and had to pass.

Check out our slideshow of favorite dishes and highlights, below. And be forewarned — the festival’s gotten so popular in its first three years that, despite La Cocina’s marriage to the Mission, organizer Caleb Zigas is now saying he might have to move the fest to Mission Bay next year, to the parking lots behind AT&T Park.