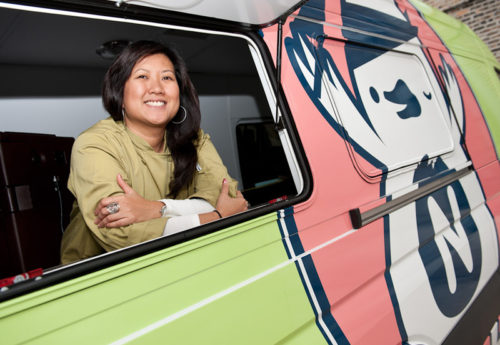 On Friday, Oct. 11, Yorkers might want to eat light.

That evening, you’ll need the extra belly room to accommodate the pizza, spring rolls, pork buns, crepes, burgers, souvlaki and more that will be served from the windows of restaurants on wheels.

The food trucks are coming.

A circle of friends who share a love for York City are behind plans to bring a big-city trend to a downtown parking lot.

And, just maybe, they’ll also inspire a change to the law that currently prohibits food trucks from operating in York City except during special events.

That law is a “cloud hanging over people that want to see street food downtown,” said Philip Given, a local photographer and co-organizer of the event dubbed Foodstruck.

“Hopefully we can spur a conversation about food trucks downtown,” Given said.

“I think it’s a good time to build on the success and the momentum and enthusiasm of a lot of other things that have been going on,” she said.

Many of York’s restaurants, the downtown “anchors,” are “barely holding on,” he said.

Open the floodgates to food trucks — which, without rent, utilities and property taxes to pay, operate with a fraction of the overhead — and it just might put the brick-and-mortar eateries out of business, Helfrich said.

“If somebody can fix that problem for me so that we don’t run all of our restaurants out of business, then I’m willing to look at it,” he said.

Helfrich, who holds one of five seats on the council, said he’s open to having a conversation.

He said he is particularly interested in the idea of permitting food trucks to operate during late-night hours, when many of the restaurants are closed.

Councilman David Satterlee, on the other hand, said he doesn’t really understand “why the ordinance was even created.”

On more than one occasion, Satterlee said, he’s had trouble finding an open table for lunch in downtown York.

Adding food trucks to the scene would encourage competition and emphasize York’s growing reputation as an “energized, edgy” city, he said.

Six trucks booked: Given said he’s hoping to host 8 to 10 trucks on Oct. 11. So far, six are booked, two of which hail from York.

Among them is Forno Bova, a new mobile wood-fire pizza business owned by Tony Bova.

In his first year with the business, the Manchester man said he’s focusing on private parties and festivals for now.

But, if York City ever loosens its regulations, Bova said he might consider a consistent presence downtown.

“Certainly, if I had an opportunity to be in downtown York on a more regular basis, I would love to take advantage of that,” he said.

Bova said he sees the Oct. 11 events as “a great opportunity for a lot of people to come in and see what the possibilities are.”