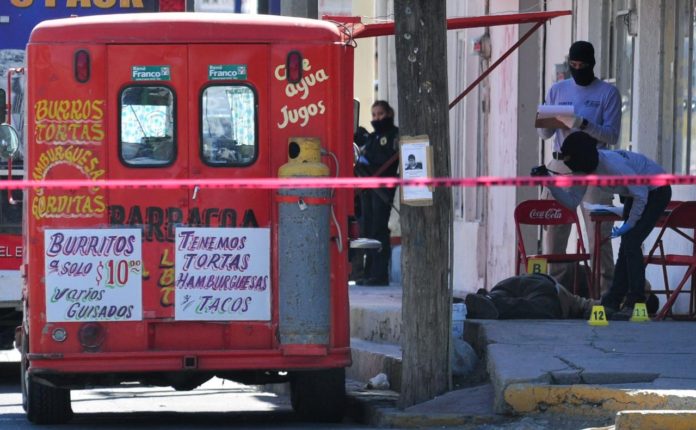 CIUDAD JUAREZ, Mexico (AP) — Gunmen opened fire on a burrito truck in this border city, killing the vendor, his 10-year-old son and two other people Friday, a day after an attack on a nearby bar resulted in 10 deaths.

The bright red food truck sat just yards (meters) from an elementary school where children were at gym class in an outdoor patio, said Arturo Sandoval, a spokesman for the Chihuahua state attorney general’s office. Panicked parents attending a meeting at the school grabbed their children and ran.

Maria del Socorro, the mother of a fifth grader, was inside the school when she heard the gunfire.

“I went directly to the patio to get my son,” del Socorro said. “I am dying of fear. I still haven’t recovered.”

The motive of the shooting — and the target — were unknown.

Sandoval said the two other slain adults were men between the ages of 25 and 30 who were eating at tables next to the truck. They wore what looked like workers’ uniforms from a beer company. The burrito vendor’s body was found inside the truck, while his son lay dead outside.

A fifth man was wounded and taken to a hospital.

Del Socorro said rumors swirled that a child from the school had been killed but she later learned he was the burrito vendor’s son.

“He wasn’t from the school, but imagine, he was a boy, an innocent boy,” she said, adding that she didn’t know whether she would take her son to school Monday.

“This city gets worse and worse. They kill in the parks, they kill in the streets. We can’t go out, and now it’s almost inside the patio of the schools,” del Socorro said, fighting back tears.

Ciudad Juarez, a city across from El Paso, Texas, has been wracked by a turf war between the Sinaloa and Juarez drug cartels. More than 3,000 people were killed in the city of 1.3 million residents in 2010.

Hours before the attack on the burrito truck, gunmen assaulted a bar in the same neighborhood. Sandoval said the death toll from that attack rose to 10 Friday after two more people died from their wounds.

Children are increasingly falling victim to Mexico’s viscous drug war, which has claimed more than 34,000 lives since President Felipe Calderon launched a military a crackdown on drug cartels in 2006.

The nonprofit group Network for the Rights of Children in Mexico estimates 994 children and youths under 18 were killed between late 2006 and late 2010, and says the number has risen since then.

A 17-year-old boy was among seven people killed in three shootings around Monterrey, a city in the northeastern state of Nuevo Leon where the Gulf and Zetas drug gangs are waging territorial battles. State Public Safety spokesman Jorge Domene said the teenager was gunned down in front of his girlfriend in downtown Monterrey. The motive for the attack was unknown.

Two of the bodies were found with threatening messages signed by the “Knights Templar,” a new group that has claimed to be behind a recent spate of slayings in the Pacific coast state. The group claims to be a replacement for the weakened La Familia cartel.

In western Colima state, prosecutors filed homicide and other charges against 15 people in connection with the assassination of a former governor, Silverio Cavazos.

The federal Attorney General’s Office said in a statement that it arrested and charged five people in the November slaying. Colima Attorney General Yolanda Verduzco said state prosecutors had charged an additional 10 people, although it was unclear if they had been arrested.

Investigators have not identified a motive for the assassination. Cavazos, who governed Colima between 2005 and 2009, was gunned down while he chatted outside his home with an official from the current state government.