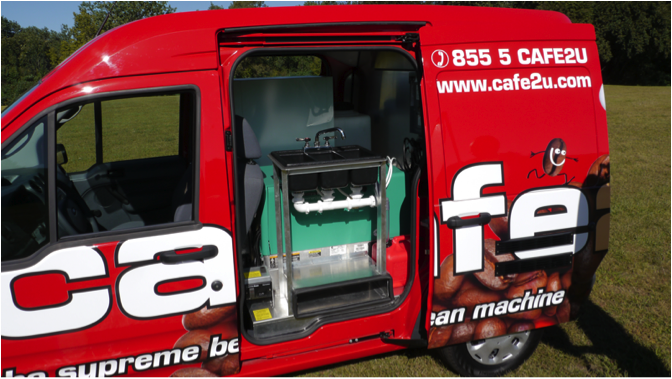 The background
Cafe2U pioneered the concept of mobile coffee vans, starting in Australia in 2000. In 2004, the company began offering territories to franchisees. Today the company is the premier mobile coffee franchise system in Australia — and the fastest-growing franchise business — with some 110 vans operating in that country and over 50 in Britain and Ireland.

The United States beckoned as a large market filled with prospective customers who have learned to appreciate good-quality coffee. But most Americans go to fixed-location coffee shops. Would they like it if someone brought high-quality espresso-based coffee drinks (and smoothies, pastries and fruit) to them at their places of work and at pecial events? A year of test marketing Cafe2U in San Diego answered that question with a resounding “Yes” and confirmed management’s decision to offer franchises across America.

Each franchisee purchases a Cafe2U van. In the United States, the Cafe2U management team decided on the Ford Transit Connect van as the franchise vehicle. It’s affordable, widely available and already proven in use by florists, plumbers, electricians and many other small businesses. Plus, with its relatively high roofline, the Transit Connect has all the cargo room required, while still being small enough to be maneuverable in tight spaces. Appropriately for an international business like Cafe2U, the Ford van is  manufactured in Turkey and Romania.

The next step was to find a custom truck firm that could modify and equip the vans to the exacting Cafe2U specifications. Enter Cummins NPower, the distributor in the Upper Midwest for Cummins Power Generation. NPower put Cafe2U in touch with Truck Utilities of Maplewood, Minnesota, which has been customizing and servicing utility, crane and commercial vehicles for almost 50 years.

Truck Utilities delivered a prototype van precisely as specified. Cafe2U managers in the U.S. were very pleased with the quality and timeliness of this test and plan to have Truck Utilities modify some 3,000 Ford Transit Connect vans over the next several years as the nationwide rollout continues.

The generator is an essential piece of equipment in a Cafe2U van. It has to power the coffee grinder, espresso machine and refrigerator. Cafe2U has had a great experience with Cummins Onan generators in Australia, Britain and Ireland, so it was a natural choice to continue with Cummins Onan generators in the U.S. as well. Each Transit connect van will have a Cummins Onan 5500 gas-powered generator. Cafe2U expects that the generator will be working at about 80% capacity during the course of an eight-hour workday.

As Lee Johns, President of Cafe2U Inc., said, “Cummins Onan has been a partner with Cafe2U for eight years and has always been a proven performer, with outstanding reliability and reliable support, wherever in the world Cafe2U is working.”

Winning customers in a new country, one espresso drink at a time Cafe2U has enjoyed rapid growth through careful planning and extensive training, and by providing quality espresso-based drinks at workplaces, as well as at special events like farmers markets, youth sporting events and vintage car rallies (http://cafe2u.com/au/videos).

The company is also providing exciting entrepreneurial opportunities for its franchisees.

Cummins Onan raises an Americano to toast the successful Cafe2U expansion in the United States.