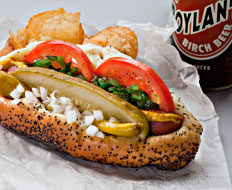 Like better-burger concepts before it, gourmet hot dog joints are hoping to revive an American staple.

With the better-burger segment grabbing headlines with the success of concepts like Five Guys and Smashburger, some operators are turning their attention to reviving the humble hot dog.

Once confined to food carts on street corners, the hot dog now finds itself assembled behind fast-casual counters, smothered with regional flavors, and marinated in premium condiments.

Washington, D.C.–based DC-3 is one concept retooling the hot dog. Ty Neal, CEO of Matchbox Food Group, launched the gourmet hot dog concept last year with his partners because the better-burger segment was too saturated.

Neal recalls being at a trade show recently and seeing a bumper sticker that read, “Honk If You’re Not Opening a Burger Concept.”

This year, its hot dogs’ turn to heat up; according to Technomic’s MenuMonitor, there has been a 5 percent increase in the number of hot dogs on fast-casual menus in 2011.

Bill Feid, who opened Billy’s Gourmet Hot Dogs in Denver in early 2010, says the menu is highlighted by innovative flavors found around the country.

“With hot dogs, you buy a meal for a family of four in a casual environment without having to take a small loan from a bank.”

“I’ve had a passion for hot dogs since I was a kid,” Feid says. “I’ve always tasted the hot dogs, wherever we traveled, whether domestically or internationally.”

“You can ask someone where they’re from and say, ‘How do you eat your hot dog?’” he says. “And in Rochester, New York, someone might talk about the Zweigle white hot, and in the Carolinas or West Virginia, where I’m from, they might say sauce and slaw.”

Both Billy’s Gourmet and DC-3 specialize in regional dogs from around the country. Highlights at Billy’s include the Tijuana, the Denmark, the Seattle, and the Texas Tommy.

“We have fun with our recipes,” Feid says. He encourages staff and customers to invent their own recipes, and if they stick, they earn permanent real estate on the menu.

Owner Mary Nguyen Aregoni loved the idea of a banh mi that looks like a traditional Chicago-style hot dog. “It’s fun and delicious,” she says.

Demand for hot dogs shows little sign of slowing down.

“In a day like today, when the economy’s kind of tough, people are looking for something they can go to that has high-quality ingredients,” Feid says. “[With hot dogs], you buy a meal for a family of four in a casual environment without having to take a small loan from a bank.”

Feid says when Billy’s Gourmet opened in February 2010, it was only the third restaurant of its kind in Denver. Since then, many others have followed suit. The owners of DC-3, meanwhile, plan to open more locations in Washington, D.C., perfect the concept, and then consider franchising.

“People are doing it as a way to bring a little excitement to their menu,” he says, “but it is a long, long way from becoming any kind of mainstream item.”

Hot dog owners seem to share that sentiment to a degree.

“The burger is always going to be the king of what we eat in America,” Neal says, “but I definitely think there is a fun and funky place for a hot dog.”