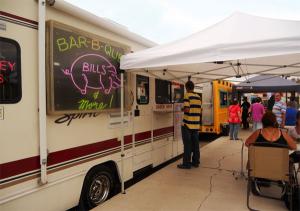 It’s Wednesday at high noon. A half-dozen food trucks line the parking lot at Talin Market, and they’re ready to serve up more than the usual hot dog. I’m here to sample the goods, beginning with The Chopping Block’s soft fish taco garnished with mango salsa. I wash it down with organic limeade at Make My Lunch, then head to Oz Patisserie’s over-the-top desserts, where I’m handed one of the best crème brûlées I’ve had in town.

I make my way back down the row and try a Bill’s BBQ pulled pork burrito and get through half of the generous serving. The rest is going to be my dinner. Alison’s truck will have to wait until next week. I barely have room for a shave ice at Coconut Mike’s, where I instantly become addicted to the piña colada. Total tab: 16 bucks.

I wash it down with organic limeade at Make My Lunch, then head to Oz Patisserie’s over-the-top desserts, where I’m handed one of the best crème brûlées I’ve had in town.

This is a pod—a convergence of multiple food trucks parked in one place. Individual trucks are also showing up all over town, mostly at lunch- and dinnertime. Burqueños are already used to dining from hot dog stands, paleta carts and burrito trucks, but these mobile kitchens offer upscale, innovative dishes—and the people who run them mean business.

The movement first emerged in vanguard cities like Austin and Portland. For some owners, being able to pick up and change locations is the answer to a worrisome economy. A strong independent streak also runs through these entrepreneurs—they work for themselves in fields they love.

Steps, an entrepreneur resource team, opened doors for Albuquerque’s food truck industry in 2010 with a series of workshops geared toward developing mobile cuisine models. The nonprofit was founded in 2006 to encourage business development in Albuquerque’s Southeast Heights. It launched the first pod in March at Talin Market to take advantage of the area’s international flavor. The idea has grown, and now Steps offers advice and coaching to all of Bernalillo County.

Cynthia Beiser, Steps executive director, tells me that anyone can come to Steps with a good idea—architects, artists and food truck owners among them. Workshops provide guidance on business plans, financing, marketing, and obtaining permits and regulations, as well as a network of resources to bring the ideas into reality. Councilor Rey Garduño’s City Food Cart Task Force now counts Steps as a member.

The pods are a growing, and they park at several locations throughout the week. The Talin Market (Central at Louisiana) pod meets on Wednesday from 10 a.m. to 2 or 3 p.m. Office workers near Masthead at Jefferson can choose from several trucks parked there on Thursdays and Fridays around lunchtime. And the Downtown Growers’ Market is collecting one of its own on Saturday mornings: Breakfast might be a Firenze Mobile wood-fired ranchero pizza—red sauce, mozzarella, green chile, Keller’s hot sausage and a free-range egg—finished off with a Fresh Squeezed! sweet limeade. Look online for schedules, menus and location updates. The season for trucks generally ends late October, but most offer catering and special-event services. There are plenty more trucks out there, so if you have a favorite, let us know. Post a comment to this article at alibi.com, or send an email to food@alibi.com. Saul and Alison Samario are familiar faces near the Sunport district, where they park their truck most days. They’ve added the Talin pod to their locations and serve traditional New Mexican fare from a custom-designed mobile restaurant, complete with a hand-carved door and vigas. John’s been turning out lip-licking barbecue for 30 years. If you’re lucky, you’ll get to his truck before he runs out of your favorite meats. You can call ahead to check. Find him at the corner of Montgomery and Carlisle. Bill Porter parks a BBQ smoker next to his food truck. The smell of ribs, turkey legs, roasted corn and pulled pork will lure you to it. I caught Mike Frazier after three 15-hour days shaving ice at Los Altos Park for a tournament of 70 Native American softball teams. At Coconut Mike’s, the 26 syrups are all pure cane sugar, no corn syrup here. Steven and Felicia Meyer have had their custom wood oven in tow since April. They add the fragrance of burning hardwoods to any location. Featuring local and natural ingredients, this mobile pizzeria sets up outdoors and doles out artisan pizza on the spot. When she’s taking time out from scouting locations for “Breaking Bad” and “In Plain Sight,” Cyndy McCrossen runs Fresh Squeezed! with her kids Penelope and Weston. They serve up lemonade and limeade, New York-style egg creams, and organic European-style hot dogs. Vegetarian, raw and/or vegan items are the mainstay of this grass-green truck. There’s a changing menu of hot sandwiches, raw desserts, smoothies and a few surprising offerings (like pulled BBQ jackfruit tacos). “Not the old brown hippie food from the seventies,” the Facebook page announces. “Neon food from the future of eating, priced so everyone can come back twenty or thirty times a month.” Callie started her food truck to augment a custom lunch delivery service. With her sister Jo lending a hand, Callie now joins the pods at Talin and Masthead delivering a menu of healthy, local and organic sandwiches, soups, salads and snacks. Gary J. Ele’s desserts have won a loyal following. Several customers told me he makes the best brownies in town. There are also cookies, cakes and a crème brûlée to die for. In true gypsy tradition, The Zingaro is a family business. It serves up a variety of gourmet burgers, dogs and sides wherever the truck leads.