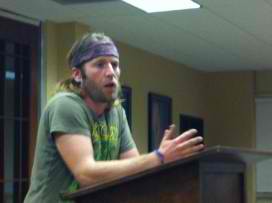 Food truck events have proven to be quite popular in Atlanta, having taken root all over the city including in Buckhead, Virginia-Highland andInman Park.

Now, one East Atlanta man wants to bring the concept to the Village.

Chris Wood, an owner in the Grilldabeast food truck, says the EAV would be just as successful for food trucks as other parts of the city.

Wood, who made a presentation this week at the November meeting of the East Atlanta Community Association, floated the idea to residents, saying it would add to the Village and be successful as food truck events have proven to be in other neighborhoods.

His idea is to have the trucks converge on Thursday evenings in the parking lot of the soon-to-be-open Argosy pub on Flat Shoals Avenue, just off Metropolitan Avenue.

Armando Celentano, a principal in Argosy, told EACA members he supports the use of the lot for the food trucks on Thursdays.

Some EACa members noted Thursday nights is when the East Atlanta Farmers Market is held and questioned if his food truck idea, if successful, would come at that program’s expense.

Ed Gilgor, chairman of Neighborhood Plannig Unit-W, also noted that restaurateurs in the Village would likely bristle at the idea of food vendors coming into the EAV and competing with them for food sales.

Indeed, he said he heard from several eatery owners who complained about having to compete with vendors during the East Atlanta Beer Festival.

Wood said he doesn’t want to detract from Village businesses.

“The idea is definitely not to take away from the Village,” Wood said in repsonse to questions. “The idea is to add to it.”

He added he is a supporter of the farmers market and envisions that both would complement each other, creating a corridor along Flat Shoals Avenue that would boost businesses up and down the street.

As it is, the famers market will be winding for the winter season on Dec. 13, so there would not be any conflict until it starts up again next summer.

He also said while many of the interested food truck operators expressed a prefeence for Thursdays, it could be held on another day.