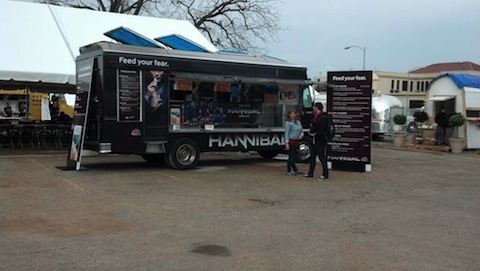 Does the thought of NBC’s upcoming new series Hannibal make you hungry? Yeah, me neither. But the show is having a little fun with its concept at SXSW this weekend, with a Hannibal-themed food truck, which features the image of series star Mads Mikkelsen dabbing his mouth after his own meal.

With Hannibal set to premiere in less than a month, NBC’s been promoting the creepy new series a bit more actively these days. That includes a food truck at SXSW. Series creator Bryan Fuller tweeted a photo of the truck.

What exactly does one feed their fear? Because we all want to know what’s on the menu for a “Hannibal” themed truck, Fuller also tweeted “Attending #SXSW @SXSW? Be glad you’re not on the #HANNIBAL FOOD TRUCK MENU,” with this photo:

No liver, fava beans and a nice chiantI? It’s probably for the best. In fact, that menu looks seriously tasty, if you can stomach the image of the notorious fictional cannibal on the side of the bus enough to place an order!

Those of us who aren’t at SXSW will have to go without Hannibal‘s tasty treats, but we still have the series to look forward to. Hannibal premieres on April 4 on NBC. More information and the new teasers for the series hereand here