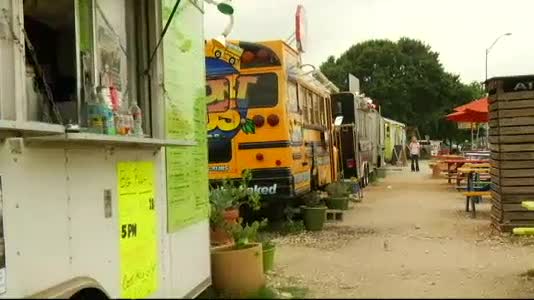 They’re like a crazy cast of characters scattered throughout the city—food trucks have become a culinary staple in the Capital City.

Some food trailers even become famous, like Hey! Cupcake. The truck was one of the first on South Congress in 2007. When the folks at Hey! Cupcake heard SoCo ATX Development planned a hotel for the spot, they worked out a deal with the Congress Avenue Baptist Church and opened in their parking lot one month ago.

“We can only grow stronger having a permanent location that people are familiar with that we have more control over,” longtime Hey! Cupcake employee Petey said.

Even though the other trailer owners on South Congress have no control over their future, some are optimistic they’ll find another spot soon.

“I’m confident that everything will be fine, but I hate to go, I love this place,” Tommy Speurlock with the Coat & Thai trailer said.

Trailer owners at the hot spot say they’ve known for years that they’d eventually have to move to make way for a hotel. Last month they received the official notice they’d have to move after the weekend.

“We’re splitting up as far as I know, we’re all going our separate ways,” Speurlock said.

The trailers will host a big farewell party Saturday at 5 p.m. You can support the trailers one last time and listen to live music and entertainment.